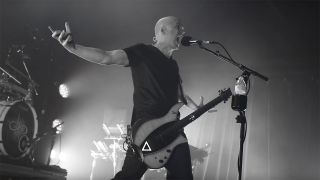 Devin Townsend's By A Thread - Live In London 2011 is to be released on vinyl for the very first time. Originally released in 2012, By A Thread captured Townsend performing his quadrilogy of albums – Ki, Addicted, Deconstruction & Ghost – over four nights in London; the first three at ULU, and the more sedate Ghost at the Union Chapel.

Each album coming as a gatefold 2LP sets plus a bonus 2LP set featuring the encores from each evening. The set also includes an LP-booklet with brand new liner notes that see Devin reflecting back on these special shows. All LP’s are available on 180g vinyl, and have been mastered specifically for the format.

It's the perfect addition for your vinyl collection, and if you're in need of a new record player, check out our guide to the best turntables in the world right now.

By A Thread - Live In London 2011 will be released through InsideOut Music on March 22. It's available to pre-order.