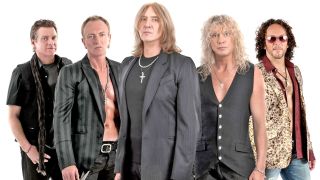 He’s recovering from stem-cell treatment which took place at the end of last year, and reports that doctors are happy with his progress.

But after a false all-clear earlier in 2014, he’s remaining careful about his battle with Hodgkin’s lymphoma.

Campbell tells That Metal Show: “I seem to be in a good spot at the moment. You can never be too certain with these things because they can come creeping back.

“There’s no sign of the tumours, so I’m hopeful we’re on the right path. I’m not letting it concern me at all, but for the next few years I’ll be doing more scans, follow-ups and stuff, just to make sure.

Def Lep are nearing completion of what will be their 11th album. It’s expected by the middle of the year, with the first single release pencilled in for March. Campbell’s also working on the first album by Dio offshoot Last In Line.

Describing himself as “pig-headed and Irish” he says: “The main thing for me was to continue working – to continue my life unabated, and to not let it compromise me as much as possible. And I think that’s been a big part of my mental recovery on this.”