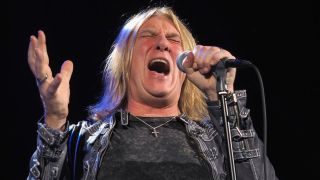 Def Leppard have cancelled the remaining 10 dates on their winter US tour.

Frontman Joe Elliott is suffering from a throat problem and has been ordered to rest.

The run of shows only kicked off on January 27, but that first show in Greensboro, North Carolina, was pulled due to Elliott’s illness. Def Lep did play in Fort Lauderdale, Florida, on January 29 but the next night’s show in Orlando was also pulled.

And the band have now confirmed all remaining dates are off, but have promised to reschedule them.

In a statement, the band say: “Def Leppard have postponed the remaining dates on their Winter 2016 tour due to illness. All shows from February 2 in San Antonio, TX, through February 17 Allentown, PA, will be rescheduled – including the previously postponed dates in Greensboro, NC, and Orlando, FL.

“Details on new dates will be announced soon. Tickets will be honoured on the rescheduled dates.”

On Twitter, drummer Rick Allen says: “The doctor basically said that if Joe continues to sing without resting his throat for a month he might do permanent damage.”

Last year, Elliott revealed he had been suffering from bronchial spasms, saying doctors had no explanation for his coughing but that he believed it was brought on by dust and gas emissions at biker festival they had played previously.

Elliott was also forced to sit out a performance on Def Lep’s Hysteria On The High Seas cruise last week.