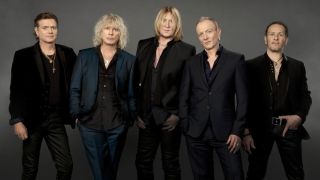 He points to the band’s August 7 performance at biker festival the Sturgis Rally, South Dakota for the issue – but insists it won’t stop him from performing their upcoming shows, which includes dates in the UK and Ireland next month.

He tells the Belfast Telegraph: “We’ve three American shows left, then we’ve a three-week break and then we’re off to Japan before the British and Irish tour. Sometimes the road is tough. I’ve had a bronchial spasm for about nine weeks.

“It’s when you’ve got a cough and all the doctors can’t figure out why you have it. It’s one of those random things, I just cough for no reason, but luckily I’ve managed to avoid it onstage.”

He continues: “It was brought on, I believe, by the dust and gas emissions from when we played this biker festival. They line up their bikes and rev their engines while you play and when you’ve got 30,000 doing it you can imagine the kind of air you’re breathing in. It can’t be good for you.”

He says that show, coupled with the fact the band have been on the road throughout 2015, means his throat “gets a battering every night” and adds: “ Sometimes you just have to suck it up and get on with the show.”

Def Lep guitarist Vivian Campbell recently reported he’d have to wait until December to see if his latest treatment for Hodgkin’s lymphoma has been a success.

Elliott says: “It’s a treatment which has worked very, very well for skin cancers and stuff like that, so they’re trying it on him. He’s like a trial patient.

“It’s a non-invasive treatment. He goes in for 10 minutes, then gets on a plane and comes back on tour. He’s probably in better shape than the rest of us.”