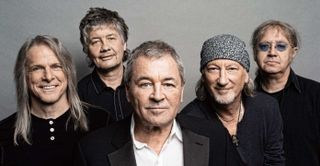 A double whammy of news has emerged from the Deep Purple camp this morning, with Ian Gillan confirming that a new Purple album is on the way, and with the band announcing that they'll embark on a UK tour with Blue Oyster Cult next year.

In a post on Facebook, Gillan confirmed that a new album has been recorded with Bob Ezrin, the man behind 2013's Now What?! and 2017's Infinite.

In a rather poetic post, Gillan explains how the band found themselves in Nashville, writing, "Bob Ezrin turned up and said ‘Let’s have dinner on Monday’. Someone enquired ‘What’s the big occasion?’ Bob replied ‘To celebrate the fact that we are all still alive…’ ‘In which case’ continued the world-weary muso, ‘We’d better make it Sunday’.

He continues: "But we survived the weekend and had dinner on Monday. Tuesday, we made another album and Wednesday we went to the pub…."

More details are due in the new year, but in the meantime the band have also confirmed a run of UK dates for October 2020. The schedule kicks off with a show at Manchester Arena on October 2, and climaxes at Arena Birmingham on October 8. Full dates below. Tickets will go on sale from AEG at 10am on December 6.

“It is fantastic to be playing some home shows again," says Gillan. "The band is cranking and full of it, plus there will be a couple or three new songs. Dunno how we’re going to squeeze it all in, but we always manage somehow. Can’t wait to blow your socks off!"

Drummer Ian Paice adds: "As always playing in your home country is special and exciting and touring with the 'Cult' ensures it’s going to be a great run of gigs."

Blue Oyster Cult's Eric Bloom says, “I am personally thrilled to be playing with Deep Purple again. As a fan of their music, I’ll be sure to stay and watch their show nightly.  Such a deep catalogue of great classic songs plus great musicianship and singing.  Great guys too. Looking forward to it!”

“Blue Oyster Cult is excited to return to the UK and support Deep Purple," adds Buck Dharma. "They're a band we’ve always admired and who has inspired BOC to rock since the beginning."