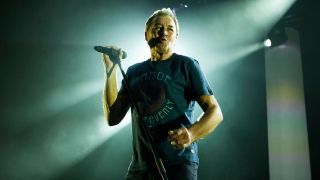 Ian Gillan says Deep Purple are a better live act since they stopped trying to be the loudest band on the planet.

The frontman recalls the band’s brutal noise levels during the 1970s, in particular the 1972 London Rainbow Theatre show in 1972 which the Guinness Book Of Records confirmed made them the loudest band on earth. Volumes reached 117 decibels that night and there are tales of audience members losing consciousness as a result.

But the singer believes his band – and their audiences – enjoy more sensible volume levels these days.

Gillan says via Something Else “We used to be pretty loud, but I think the focus has changed now. The impact of sheer volume was one thing that used to get written up about. The equipment now is so sophisticated, you can have volume without pain.

“It’s actually enjoyable. You’re not running around with your ears ringing after the show, like you used to be. There’s a lot more focus on what’s actually going on on stage. You can get involved with that a lot more. I think it’s a vast improvement over what it used to be.”

Deep Purple are expected to release their 20th album this year. They were recently voted as one of the most deserving of a place in the next batch of Rock And Roll Hall Of Fame inductions.