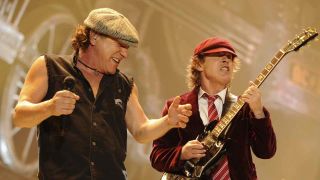 The rumoured new AC/DC album will feature “some surprises” regarding Malcolm Young, according to ex-Twisted Sister singer Dee Snider.

Speaking on Sirius XM’s Trunk Nation show, Snider revealed that he recently had dinner with AC/DC singer Brian Johnson, who reportedly told him about the band’s plans.

Snider said: “He told me a lot of stuff, and a lot of stuff that I don't wanna say. But we know from the photos, and Brian confirmed it, they've been in the studio, they've been recording. The original – I don't say the ‘original’ guys, because a lot of 'em are gone, but I say the ‘classic’ lineup is back together and there are some surprises, which I can't talk about, regarding Malcolm Young that just had my jaw on the floor. I will say he will be present. So this is AC/DC as we know and love them.”

Snider was appearing on Trunk Nation as part of a Change.org petition to get AC/DC to appear at the Super Bowl 2021.

News of an AC/DC reunion began to emerge in August 2018, when Johnson and estranged drummer Phil Rudd were spotted outside Vancouver’s Warehouse Studios where the band have recorded several albums in the past.

Then, in April this year, US radio host Eddie Trunk reported: “I have sources that have told me that they are absolutely going to tour with Brian back again. That’s all unconfirmed from their camp, but I had it from some reliable sources.

“I think it’s pretty much a done deal that AC/DC, at the very least, are going to release some sort of record and it’ll be some sort of tribute to Malcolm Young, just like Back In Black was a tribute to Bon Scott.

In December 2018, Snider tweeted about the current status of AC/DC, saying that frontman Brian Johnson was “good” after his much publicised hearing problems, and adding: “All four surviving members have reunited with tracks recorded by Malcolm while he was still alive.

“Malcolm's nephew Stevie Young is replacing him – he's done this a couple of times before. It's as close as you can get to the original band.”

One of his Twitter followers then asked: “So, I gather that Cliff Williams and Phil Rudd will be back?” Snider replied: “Yup and yup!”