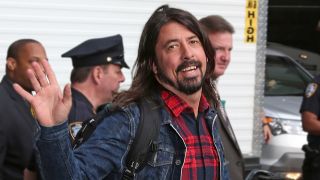 Dave Grohl has explained the story behind a fan letter he wrote to Ian MacKaye when he was 14.

The note surfaced last week when the Foo Fighters mainman posted a picture of it, saying: “Look what my hero Ian just found!”

Now he’s told the NME that he was hoping to start a chain reaction that would wind up with his high school band Mission Impossible signing a deal with Dischord Records.

And Grohl adds: “I’m telling you, if the Foos could do a Dischord single, then we could break up – done deal.”

The band continue a UK tour later this month in support of eighth album Sonic Highways: