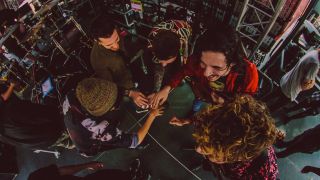 Crown The Empire will release their album Retrograde on July 22.

The Texas metalcore outfit last reissued their second album The Resistance in October last year. They also released a video for track Cross Our Bones.

Vocalist Andy Leo says: “This album has been an accumulation of ideas, lessons and observations about who we are as a band and how we see the world. It’s taken 5 years for us to grow and really nail down a sound that doesn’t fit the status quo of what people are expecting from us. We’ve reinvented ourselves and we hope you enjoy the ride.”

A teaser, artwork and tracklist for Retrograde can be viewed below. The album can be pre-ordered via Amazon and iTunes.