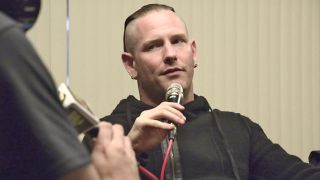 Corey Taylor says he’d just be a “dick from Iowa” if he didn’t speak his mind in interviews.

And he believes being taken out of context is a price worth paying for remaining true to himself.

The Slipknot frontman accepts that he regularly says controversial things when a microphone is nearby, which can later be taken out of context.

Taylor tells KFMA Rock 102: “Half the time all they want to do is make sure they get it up just so they can have it in the headline. Then all the cut-and-pasters pick it up and smear it all over the place. It’s infuriating.

“The old adage still applies – the only bad press is no press at all. But sometimes you just want people to get it.

“That’s the price you pay for not censoring yourself. That’s the good side and the bad side to being able to speak your mind, and not being one of these vanilla, cookie-cutter celebrity types.”

Reflecting that his career would have been over 15 years ago if he wasn’t so outspoken, and that people would just ask “Who’s the dick from Iowa?” Taylor continues: “If that’s the price you pay for being yourself, then I guess I’ll deal with it.

“If you’re going to have stuff smeared, it might as well be stuff that you believe.”

Taylor is gearing up to record Stone Sour’s sixth album once Slipknot’s current tour is complete. He reports: “We’ve got 18 songs right now that are solid, probably the best stuff we’ve ever written. We’re going to record everything, and it just comes to what we’re going to put on the album.

“People will be like, ‘Wow, there’s just so much good stuff coming out of this camp.’ We’ve got a lot of good stuff coming up. We’re going to record January, February, and try to get the album out early to late spring.”

Corey Taylor: Hate me all you want, just pay attention