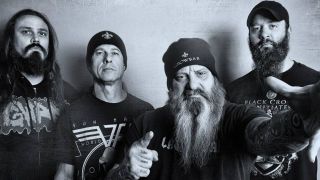 Crowbar mainman Kirk Windstein is sharing his recipe for longevity after more than 30 years in the music business.

Windstein helped put New Orleans on the metal map when he formed Crowbar in 1989 and Down in 1991, with both bands continuing to create new music and play live shows.

The singer left Down in 2013 to focus on Crowbar’s 25th anniversary last year, which was marked with the release of their 10th album, 2014’s Symmetry In Black.

Nearing the end of an extensive North American tour, Windstein tells National Rock Review that he built his career from the outset with one goal in mind.

Windstein says: “It’s forever ago when I think back to the very beginning. I actually played my first gig in 1980 – 35 years ago – at an old fair or something. In a way it’s forever ago but, at the same time, my goal was always to have longevity, not to have huge success. I’m much happier being on the journey that never ends than being hot for a couple of years and then your career is done.

“My biggest fear of becoming a musician has already come true, which is the way the business is these days with no one selling records and illegal downloading. It really has changed: bands that once were really successful are literally falling off the map, falling off the face of the earth. It’s like bands will get popular and then – boom – they’re gone.”

He continues: “We’ve been so fortunate to survive that but I think a lot of the reason we have survived and continue to thrive and continue to go forward is that we never did have a huge amount of success and we never were the hot flavour of the month. We never fit into any genre. We’re just Crowbar.”

The singer says the band have maintained a lengthy career based on a few basic principles.

Windstein says: “We make our own music and for us, it’s just about slow and steady wins the race, y’know, the hair and the tortoise mentality. Keep doing what you’re doing, keep doing it at a high level, be great to your fans, treat them with respect, kick ass very night and you’ll be able to continue forward.”