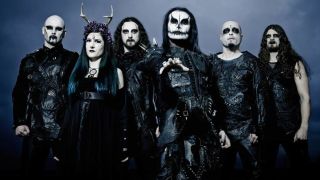 Cradle Of Filth will enter the studio in Brno, Czech Republic, this week to write their next album.

The British outfit aim to launch the follow-up to 2015’s Hammer Of The Witches next September.

They say: “Cradle Of Filth are off to Brno in the Czech Republic on Thursday for their week long writing session for the follow-up to 2015’s much-acclaimed Hammer Of The Witches album.

“Should be an absolutely killer time just knowing what music is already on offer, slathering in the wings and how much a pint of beer costs in Czechia. The new album is destined for a September 2017 release.”

Last month the band reissued their 1995 album Dusk… And Her Embrace using the band’s original master tapes – which weren’t used at the time due to a legal battle with their then-record label, Cacophonous Records.

Frontman Dani Filth recalled the recording sessions for the “epic” record at a Birmingham studio which they shared with ballet dancers and Boy Scouts.

He said: “It was actually half-studio, half-rendezvous for the Boy Scouts every Wednesday afternoon. There were also ballet lessons on Monday afternoons, so we had to stop making music.”

Filth added: “It was quite ironic really – the fact that this huge, epic black metal record was brought to ground by little girls in ballet shoes and their mums.”

Cradle Of Filth will next appear at Zvolenska Slatina’s More Than Fest in Slovakia on August 19.