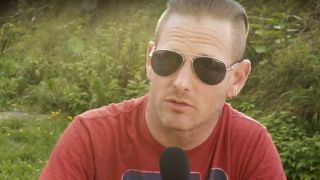 Stone Sour’s second in a series of three cover EPs will be out in October or November, frontman Corey Taylor has revealed.

*Straight Outta Bur*bank is the follow-up to this year’s Meanwhile In Burbank… and features Halestorm’s Lzzy Hale singing a version of the Rolling Stones’ Gimme Shelter as well as takes on material by Iron Maiden, Slayer, Motley Crue and Bad Brains.

Taylor tells Lazer 103.3 (via Blabbermouth): “It’s done, it’s mixed. We’ve got the artwork all together. It’s looking to come out either October or November. So that’s where that’s at. And it’s awesome. It’s really good.

“We’re actually more into this one than we are Meanwhile In Burbank. And that’s nothing against the first one; the first one’s super solid. This one is so diverse, but it all feels really good.”