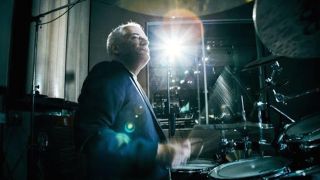 The family of Jon Hiseman have announced his death at the age of 73. The former Colosseum, Colosseum II and Graham Bond Organisation drummer passed away after a battle with brain cancer.

Hiseman’s daughter, Ana Gracey, posted on Facebook that her father “passed away peacefully at 03.55am.”

Hiseman underwent an operation recently to remove a cancerous brain tumour. Sadly, this life saving surgery failed, and on June 1 it was announced by his daughter Ana that he had been admitted to a hospice:

"We have been told there is no hope for my dad now and it will be just a matter of days. He has been moved to our local hospice - he is not receiving any treatment or food, but he is in a peaceful state and gradually drifting away."

Given the Visionary Award at the 2016 Progressive Music Awards, Hiseman first got noticed in the 1960s, when he took over from Ginger Baker in the Graham Bond Organisation.

He then went on to join John Mayall's Bluesbreakers, playing on 1968's Bare Wires album with Mick Taylor on guitar. Later that year, he founded Colosseum, the seminal and pioneering jazz rock band. After they broke up in 1971, he formed the short-lived Tempest with Allan Holdsworth, before starting Colosseum II in 1975.

Hiseman also worked closely with his wife Barbara Thompson, as well as Andrew Lloyd Webber. In 2017, he started the trio JCM with fellow Colosseum alumni guitarist Clem Clempson and bassist Mark Clarke. Earlier this year, they released debut album Heroes, ironically inspired by musicians who were close friends of Hiseman and have sadly passed away in recent times.

It was during the subsequent tour that the drummer was taken ill, leading to the diagnosis of the tumour and the subsequent cancellation of all shows.

On his Facebook page, Clem Clempson, his longtime friend and band matecommented: “It is with great sadness and a feeling of utter disbelief that I must share the awful news that my dear friend and colleague of almost 50 years, the great Jon Hiseman, passed away early this morning after a brief and courageous battle with cancer.

"Hard to believe that this could come to pass just a few weeks after we were playing together onstage with JCM. For all who worked with him he was a constant guiding light, inspirational and indefatigable, a true leader who will be greatly missed by his many colleagues and legions of fans. Thanks for everything Jon, RIP.”

In 2016, when he won Prog magazine's Visionary award, he commented: “I didn’t feel like a visionary at the time. I fell in love with jazz but also other music, like Elvis Presley. But how do you mix that together? Well, I thought you could take great vocalists and mix it together with that kind of music.

"It took me a few years to get the mix right, but with the live album [1971's Colosseum Live] we certainly got it right. That brought it all together and the audiences really took to it immediately. Maybe the world was a lot more open in those days.”