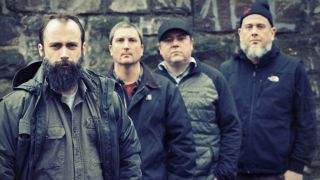 Clutch have revealed the name of their 11th album and seven of its tracks.

Frontman Neil Fallon has confirmed to TeamRock that the follow-up to 2013’s Earth Rocker is entitled_ Psychic Warfare_, and it’s due in September.

The band debuted some of their latest songs at a showcase gig in D’Angelico Guitars in New York this week.

Fallon tells Alexander Milas on TeamRock Radio’s Metal Hammer Magazine Show: “‘Psychic warfare’ is a lyric from the first track, X-Ray Visions. It’s about a guy holed up in a motel for unexplained reasons, and he’s under great duress, being attacked by psychically-empowered agents of unknown origin. At least, that’s the back story I have in my head.”

He says the concept is influenced by SF author Philip K Dick. “His general philosophy and questions have always crept into my lyrics, because I share an interest in it,” he adds. “On Earth Rocker, Crucial Velocity was definitely a Philip K Dick song for me. On this record, X-Ray Visions certainly is.”

Fallon also found inspiration from their secluded studio location, leading to the lyrics for Quick Death In Texas. He explains: “I was staying in a kind of unique, maybe 100-year-old property, by myself. I got spooked out because I come from the east coast and the suburbs and I was out in the woods. That was the environment that brought out Quick Death In Texas – and the locals.”

The new tracks played at the showcase were X-Ray Visions, Firebird, Quick Death In Texas, Our Lady Of Electric Lights, Monsters, Decapitation Blues and Son Of Virginia.