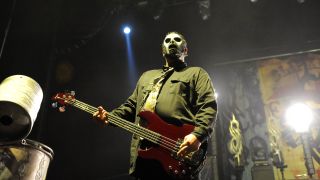 The metal world was stunned when the news broke that Paul Gray,bassist with the mighty Slipknot, had been found dead in a Des Moines hotel room on May 24, 2010.

A founder member of the multi-million selling bemasked, nine-man wrecking crew, Paul was known to fans as No.2 or simply ‘The Pig’ and was one of the most widely loved and respected figures in modern metal. His enormous contribution to Slipknot’s music and career must never be forgotten or underestimated.

In 1992, Paul teamed up with Shawn ‘Clown’ Crahan for the first time in a band called Painface. A few name and line-up changes later, including the arrival of drummer Joey Jordison, and the first incarnation of Slipknot was born. They played their first show together in April 1996 at a club called Safari in Des Moines. Having experimented with various image ideas over the years, the band had now settled on their trademark masks and boiler suits. They then recorded their first, self-financed album, Mate. Feed. Kill. Repeat, and it was released on Halloween, 1996. By early 1998, Paul and Shawn had assembled what would become the classic Slipknot line-up, with frontman Corey Taylor and percussionist Chris Fehn the last to join.

They recorded a new demo, Spit It Out, early that year. It showcased the sound that Paul had been instrumental in developing; a chaotic, brutal and intensely original blend of extreme metal riffing, dark melody and fizzing electronics that marked a new beginning in heavy music and a powerful nail in the coffin of the nu-metal scene that was then stuttering to a clumsy halt.

The demo was sent around to various record labels and producers, including Ross Robinson, with whom the band would form a strong alliance. Signing to Roadrunner Records in July 1998, Slipknot soon recorded their self-titled, debut album with Ross and, after receiving a torrent of ecstatic reviews from press on both sides of the Atlantic, it was released and immediately embraced by metal fans across the globe, eventually going platinum in the US and gold in the UK.

Although Paul was never the most vocal member of Slipknot and gave fewer interviews than Shawn, Joey or Corey, it was always evident to fans of the band that he was a key creative driving force behind the band. Composer of many of their greatest riffs and most memorable songs, Paul’s formidable stage presence and musical skills were an unmovable backbone around which the rest of the band’s multi-limbed insanity would erupt every time they hit the stage.

Each of their subsequent albums – Iowa (2001), Vol.3 – The Subliminal Verses (2004) and All Hope Is Gone (2008) – were huge commercial successes, as Slipknot toured the world, crushing audiences and blowing minds wherever they went. Whether the band continue now or call it a day, heavy music will never be the same again without Paul Gray pushing it passionately forward.

In recent times, Paul had been jamming with Sepultura’s Andreas Kisser and Tim ‘Ripper’ Owens in the all-star covers band Hail!, and was looking forward to beginning work on the next Slipknot album. Taken from his wife Brenna, his family and his friends at the cruelly young age of 38, he will be greatly missed by everyone who loved him, not to mention the millions who thrilled to his fantastic music.

This was first published in Metal Hammer issue 207.