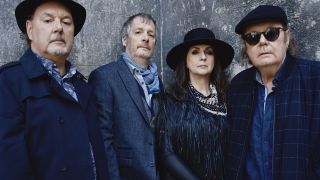 Clannad have announced a farewell tour which will take place across the UK in March next year.

The group have revealed a run of 14 shows on the In A Lifetime tour, kicking off at Sheffield’s City Hall on March 4 and wrapping up with a set at the Dome Concert Hall in Brighton on the 23rd of the month.

Clannad are also planning further shows throughout 2020 in Europe, Australasia, North America, Japan, and South East Asia, details of which will be announced in the coming months.

To coincide with the UK tour, the band will release a career-spanning anthology, also titled In A Lifetime.

It’ll be released on March 13 as a 38-track 2CD set, 2CD deluxe, 2LP, 2LP deluxe, an expanded deluxe edition featuring more than 100 tracks and on digital and streaming platforms.

The full tracklist will be announced closer to launch.

Clannad release their self-titled debut in 1973, with their most recent studio album Nádúr arriving in 2013.