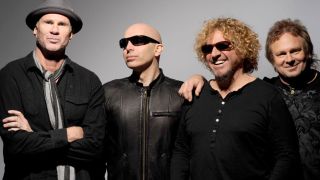 He, Sammy Hagar, Michael Anthony and Chad Smith launched their self-titled debut record in 2009 and followed it with Chickenfoot III in 2011. But they’ve been beset with scheduling issues ever since as Smith was called back to work with the Red Hot Chili Peppers, while Hagar got busy with a solo project.

Satch tells Artisan News: “It is in the pipeline. Everyone’s got demos – everyone’s excited. I don’t know about the schedule, though. That is still, as usual, in the chaotic Chickenfoot state.”

Meanwhile, the axe icon has discussed the recent TV showdown between Smith and his lookalike, comedian Will Ferrell.

Satch says: “I think Chad learned a lesson – that Will Ferrell is a cheat. He cannot be trusted; he wasn’t really drumming. Did you see Chad having to adjust his mics? That’s a Will Ferrell trick right there.

“Chad’s quite funny. He’d have an easier time replacing Will in a movie than Will would in Chickenfoot – I can tell you that much.”