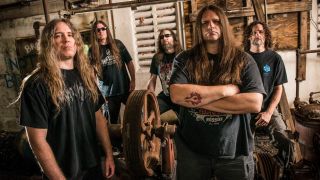 Cannibal Corpse are the latest band to launch their own beer.

The death metal veterans have teamed up with Indiana-based 3 Floyds Brewing Company on the ale, called Amber Smashed Face. The brewery describes the drink as “an aggressively hopped American Amber Ale sure to crush your skull and liquify your brain.”

Iron Maiden, Queen, Behemoth, AC/DC, Metallica and a string of other acts have put their name to beers in the past. And 3 Floyds have previously collaborated with Pelican and Eyehategod.

No release date has yet been revealed for Amber Smashed Face.

Cannibal Corpse are currently on a North American tour before heading south for a run of shows.