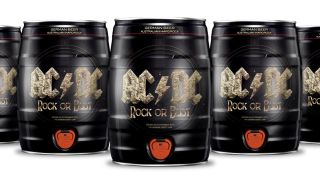 AC/DC will launch a limited-edition beer in time for their home shows in Australia.

The Rock Or Bust brew will be on sale in Aldi supermarkets in one-pint cans and five-litre kegs, to tie in with the band’s album of the same name, and their world tour stops Down Under in November.

A spokesman for the chain says: “The combination of great German beer and Aussie hard rock just seems like a match made in heaven.”

Meanwhile, AC/DC have been blamed for errors made by the Chicago Cubs during their baseball win against the Milwaukee Brewers this week.

The Cubs won by nine runs to five, but the team’s manager says he’d never seen them make so many mistakes, following the band’s show at the their Wrigley Field on September 15 – where they performed recent track Play Ball.

Cubs boss Joe Maddon tells the Chicago Tribute: “Since the AC/DC concert we’ve had a little trouble. I don’t know if they were out there taking ground balls, or if they had nine-inch heels or spikes.

“They totally messed up the infield – it has nothing to do with the groundskeepers. I’ve seen a bad hop at third and a bad hop at second. I didn’t see one bad hop all year.”

Second baseman Starlin Castro was singled out for a major mistake during the game – but Maddon won’t hear of it. “Starlin has done a nice job. I don’t want anyone blaming him on that error,” he says.

Castro says of the playing surface: “It’s not like it used to look.”