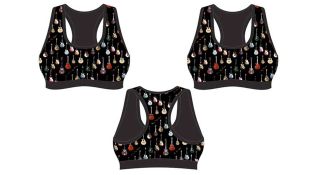 The bra was designed by Brian May, with the company saying, "Highlighting Brian May's consummate artistic talents, this active wear salutes the entire range of Brian May Guitars with a bright, bold design prominently featuring the united colours of BMG - because it doesn't have to be red to be special!"

The bra is available in five different sizes, and joins a range of leisurewear that also includes an official BMG shirt (once again designed by Brian May) and a 'hold everything' waistcoat, designed to "keep all your life support essentials on your person".

The Brian May Guitars Sports Bra is on sale now, priced at £35.

Earlier this month, Queen became the first British band to be celebrated on an official UK coin.

“This is a big, ‘Who could have imagined it?’ moment for us," said May. "When we began as Queen, even the first rung of the ladder to recognition seemed remote and unreachable. To have our band recognised and our music celebrated in this way is very touching – a real honour."