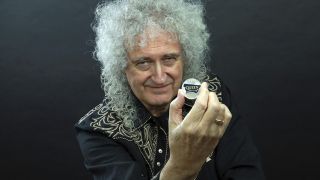 Queen's Brian May with the new £5 coin (Image credit: The Royal Mint)

The coin is available in a variety of versions with the £5 Brilliant Uncirculated coin presented in four different slipcases covers representing Queen, their live work and the albums Hot Space and A Kind Of Magic.

All are available to purchase through the Royal Mint’s website, with prices ranging from £13 for the Brilliant Uncirculated coin up to £2020 for the gold proof coin.

May says: “This is a big, ‘Who could have imagined it?’ moment for us. When we began as Queen, even the first rung of the ladder to recognition seemed remote and unreachable. To have our band recognised and our music celebrated in this way is very touching – a real honour.”

Taylor adds: “Marvellous, all this fuss over our band. I feel entirely spent.”

Designer Facey says his first memory of hearing Queen was Bohemian Rhapsody in the famous car scene from 1992 Mike Myers film Wayne’s World, and he’s been a fan ever since.

He adds: “It’s therefore such an honour to be asked to commemorate such an extraordinary band on a UK coin, and even more exciting as it’s the first coin I’ve designed.

“ All four members of Queen were vital for their bravery in the music they created and the boundaries they pushed, and I hope that fans will enjoy seeing each of their contributions paid tribute to on this coin.”

The Royal Mint’s chief commercial officer Nicola Howell says: “Queen were one of the most influential bands of their generation, and their timeless classics are still enjoyed by millions of fans around the world.

“That’s why we’re so pleased to be honouring their great contribution to British music with their very own coin, which will be the first time a British band has been celebrated on UK coinage.

“British music is one of our greatest contributions to culture around the world, and its musicians like Queen who are at the forefront of this.

“We’re looking forward to announcing other coins in our new ‘Music Legends’ collection later this year, marking the work of other exceptional British musicians.”