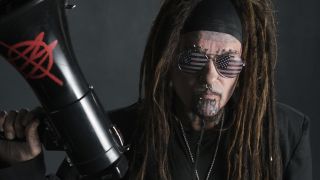 Ministry’s history will be explored in a new book which is due out later this year.

It’s titled Prescripture: The Visual History and has been written by author Aaron Tanner and will feature an introduction by former Dead Kennedys frontman Jello Biafra.

It’ll be limited to just 2000 copies and will contain more than 200 pages of rare and previously unpublished photographs and will be published by Melodic Virtue on December 6.

Navarro says: “There have always been bands full of angst, rage, anger, drama, and theatrics. It was Ministry who first came along at the dawn of the industrial movement, who combined these things so seamlessly, that the audience was about to have its first immersive experience.

“Not only were the shows a visceral experience, but lyrically, Al Jourgensen was preaching the truth on top of the finely crafted sound of this new musical tonality of aggression and machinery. Loud and aggressive, yes, but also painstakingly put together as a symphonic experience.

Ministry – Prescripture: The Visual History is now available to pre-order direct from the Melodic Virtue website.

Ministry will join Slayer on the last leg of their final tour, which will get under way in Asheville, North Carolina, on November 2.