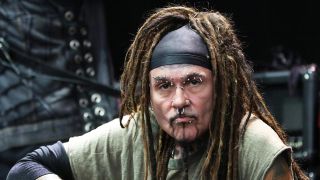 Al Jourgensen, founder and frontman of pioneering industrial metal band Ministry, has spent a lifetime going against the grain, both musically with side projects including Revolting Cocks, Lard and Surgical Meth Machine, and personally, spending 18 years as a junkie before getting clean.

Not that sobriety has mellowed him or dulled his edge – while searingly honest about the depths he reached during the heroin years, he appears to regret nothing. Ministry, meanwhile, remain a formidable band, Jourgensen’s unbridled rage married to truly evil riffs and filthy, amphetamine-fuelled dance beats that bring the grimiest aspects of the underground to the surface.

Born in Cuba and raised in Chicago, Al formed Ministry in 1981 – and went on to invent industrial metal – after leaving his synth-pop band Special Affect, but only broke through to the mainstream in 1992 with Psalm 69: The Way To Succeed And The Way To Suck Eggs. But even before then, the stars of the future were listening to his apocalyptic railing against the political elite and the bovine public: without Ministry, there’d have been no Nine Inch Nails, no Marilyn Manson, no Dillinger Escape Plan.

He once described Ministry’s sound as “music to kill yourself to”, but in a life that’s taken in the highest highs, the lowest lows and friendships with some of the late 20th century’s most unstable characters – including the great gonzo author William Burroughs – Al Jourgensen is a testament to speeding though life on the edge and living to tell the tale.

Here, this unique character takes us back to the start of it all…

“I remember being on one of the last over-crowded plane-loads that [Fidel] Castro let out of Cuba. It must have been pretty traumatic because I was only about two years old, and I actually remember that plane ride. I understood at an early age that with the American embargo on Cuba – and being a political refugee – becoming an America citizen was a big deal.”

“It’s not really a musical memory, but there is one thing that’s stuck in my mind. My dad was a race car mechanic and when I was about five he took us to the Indianapolis 500. I just remember the noise of those cars, and I was like, ‘This is the coolest sound!’”

Did you learn an instrument?

“I never had that kind of drive. I didn’t know what I wanted to do. I tried rodeo for a while right after high school and that didn’t work out: the bulls basically kicked my fucking ass. So I figured there had to be a better way of meeting chicks than riding a thousand pound beast. A highly pissed-off beast at that. I’d dabbled with the guitar, drums and stuff, but not until I had all my ribs busted on a ride did I start taking it seriously.”

You were a heroin addict for 20-odd years, at what point did you decide to get clean for good?

“I was sleeping on some heroin dealer’s couch clinging onto the one last guitar that I hadn’t pawned yet, and I got this spider bite. The doctor wanted to take my fucking arm off so I looked at him and said, ‘Look motherfucker, I don’t play drums for Def Leppard, I need this fucking arm.’ I was at death’s door: I’d owned a 13-room compound and now I had a $500 a day habit, I’d gone through all my savings and pawned off all but one of my guitars. I’d hit rock bottom. A light bulb went on over my head and it all made sense: shit now or get off the pot. If you want to die, die today.”

“To be honest it was easier than I thought it would be. The sickness starts and you think, ‘Gotta get another hit man, I can’t stand being sick.’ But it’s like, ‘Well so fucking what if you get sick?’ Just deal with it. Once I’d done it I thought, ‘Why didn’t I just do this years ago?’”

What happened when you got busted at your El Paso compound at 4am?

“The authorities thought we had an armed compound with loads of guns and drugs and shit so they sent the same people that did the [David Koresh, Camp Davidian] Waco siege. They sent everybody: The ATF [Alcohol, Tobacco and Firearms] people, the State Police, local Police, County Police, FBI… they even threw in an IRS [Inland Revenue Service] agent in case they found more than a certain amount of cash. They were prepared to confiscate the house if they had to. It was pretty funny watching all these stormtroopers tear down the walls looking for weapons we didn’t have.”

How did you come to be friends with cult author William Burroughs and 60s drug guru Timothy Leary?

“Warner Brothers weren’t going to release [Ministry’s 1992 album] Psalm 69 because we’d sampled some William Burroughs. James Grauerholz [Burroughs’ Manager, and long term companion] heard that the new Ministry album was being delayed because of this, and called me saying, ‘No one’s even contacted us. You can use anything you want. In fact why don’t you come and work with him?’ So I met him at Lollapalooza and we got along great. He introduced me to Timothy Leary and me and Tim got along even better. I lived with Tim for about two years, and there was never a dull moment. Twice a week Tim would have these dinner parties, we’d have astronauts, business leaders, politicians, musicians, transsexuals… just a cross section of people. Tim called me the delinquent son he never had, because all his kids came out normal.”

Didn’t you have some useful horticultural advice for William Burroughs?

“[Laughs] Yeah, I did. Bill loved his petunias, but these racoons would get in and trample ‘em down and eat ‘em, so he’d try and shoot them. He was a pretty good shot with a rifle, but they were just too fast for him, so I had him take his wafers of methadone and stick them out in the petunia plants. The racoons ate ‘em and the methadone slowed ‘em down just enough for him to shoot ‘em. That man was definitely a trip, I can tell you. He didn’t really live on this planet, he was definitely a citizen of Interzone. Plus he and I both have that cockroach gene, where you can survive anything.”

Is it true that you had your toe amputated?

“Yeah that’s true. I stepped on the tip of a broken hypodermic needle back when I was using. The needle tip went up into my boot, and the wound got infected. It went gangrenous so they had to amputate. Trust me, there were loads of reasons to quit heroin.”

Is it also true that the Rolling Stones came to your house?

“Yup, that is also true. I had a friend, he was the town drunk – a proper fall down drunk – and he’d known Bobby Keys, the Stones’ sax player who did Sticky Fingers. This guy was a real bullshitter, so when he says his friends are coming over to play pool, the last thing you think is that it’s going to be Bobby Keys, Keith Richards and Ron Wood. I had to go to Australia the next day and I needed to detox, so I just stayed on the couch. I was yelling, ‘Goddamn it! Get your fucking friends out of here!’ He was like, ‘Can we just play pool?’ I just shouted, ‘Whatever! Just get out!’ I could hear English accents in the other room, but I didn’t even think twice about it. The funny thing is that Keith probably had a load of heroin in his limousine.”

What’s the most ridiculous rumour you’ve ever heard about yourself?

“All the usual ones: that I’ve died and stuff.”

Ministry was nominated for a Best Metal Performance Grammy for Bad Blood. Was this a career highlight?

“[Laughs again] Man, I didn’t even go. I couldn’t care less. Those awards shows are so political – and completely rigged anyway. When you get nominated they send you this medallion that says you’ve been nominated, along with your invite. I was sitting alone in this bar in Chicago, this crummy little dive bar with crap on the screen behind the bar. There was this fat chick that just kept bothering me, saying, ‘I know who you are, I know who you are,’ and so on. I was so annoyed. I was like, ‘If I give you this shit medallion will you just fucking go away?’ So I wound up giving my Grammy medallion away to a fat chick.”

Is there anything else you’d still like to do with your life?

“I want to go into teaching. I need to get my masters degree first, that’s what I’ve always wanted to do. I know it sounds really strange me saying that, but I think that would be a cool thing to do.”