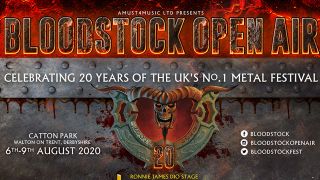 Acid Reign frontman H says: “Anyone who witnessed our 2016 show on the Sophie Lancaster stage knows exactly how much we love playing Bloodstock.

“There is a lot of excitement in the Acid Reign camp right now, we finally got a new album out after all these years – 29 to be exact – and now we get to put a Bloodstock-sized cherry on the top of that cake. Can't wait to see you all there!"

Acid Reign will play on the Ronnie James Dio main stage on the Friday, where they’ll be joined by Svalbard.

Swedish outfit Soen will play on the Sophie Lancaster stage on the Friday, as will Edinburgh’s Metal 2 The Masses favourites Dog Tired.

Viscera and Bailer will play the Sophie Stage on the Saturday, while Idle Hands will open the main stage on the Sunday.

Bloodstock organisers have also today announced the free Nordic Spirit Game Arena, where fans will be able to play a range of video games on Xbox One, PlayStation 4 and PC – and there will also be several arcade machines to play too, courtesy from Jagermeister and Redbull.

Tickets for Bloodstock 2020 are on sale now, while the festival has once again teamed up with Big Green Coach to get people to the festival site. Transport will leave from 33 different locations across the country, with further details available through the official website.

Bloodstock’s official YouTube channel has also just hit the 100,000 subscribers mark. Check it out for interviews, live footage and more.