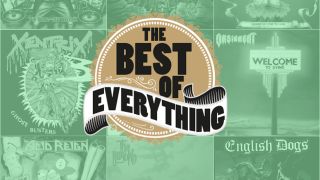 Formed in 1985, Yorkshire thrashers Acid Reign brief career yielded two full-length albums – 1989’s ‘The Fear’ and its 1990 follow-up ‘Obnoxious’ – and a clutch of EPs and singles, including their 1988 debut ‘Moshkinstein’. The band split in 1991 after parting ways with the Music For Nations label.

Now, 24 years later, frontman Howard ‘H’ Smith – who has spent several of the intervening years as a stand-up comedian and host of All About The Rock: Talking Bollocks podcast – has rebooted the band with a new line-up. So, who better then, to choose the best 10 bands from the UK thrash scene?

**10. ENGLISH DOGS **They essentially started out as a punk band then started changing with To The Ends Of The Earth, which came out in 1984. You listen to it now and you go ‘Yeah, that’s thrash.’ They were pioneers. They did end up becoming more metal, and actually released an album on Underdog Records when we were still on Under One Flag. But they were quite DIY. They started out punk and became more crossover. I saw them play in Leeds in about ‘86/‘87, and they were awesome. They were a very cool band. Personally, I’m a fan of their earlier stuff – their current guitarist won’t thank me for that, because I know him and he’s a top guy, so sorry. My favourite album of theirs is Forward Into Battle, which is very, very cool.

9. BOMB DISNEYLAND/BOMB EVERYTHING Keeping a sort of punky feel to it would be one of Acid Reign’s old support bands. They were originally called Bomb Disneyland, but funnily enough Disney didn’t take too kindly to that as a band name and got involved and they had to change their name to Bomb Everything. But Bomb Disneyland and Bomb Everything were two superb bands. They supported us and we got on really well with them. They had a very punky, very thrashy sound and were, frankly, way ahead of their time. They released a single called Male Mary, and their first album was called Why Not?, which had classic tracks likes Faster Bastard. They were just brilliant. And they do definitely count as one band.

8. THE BEYOND Next up is another one of our favourite support bands and a band who people may not particularly describe as thrash, but the reason I mention them is I’m very much a believer that it’s as much a mindset as a style. Thrash should be an ethos. Anyway, their drummer, Neil Cooper, has been in Therapy? for the last 12 or 13 years. Their early stuff is pretty thrashy. Their first album, Crawl, is absolutely superb. It’s some of the thrashiest rhythm section you’ll ever fucking hear. They released an EP called Manic Sound Panic and I mean, is there a more thrash title than that?! That EP is no longer available, but I have managed to find an old tape of it and created some MP3s, so if anyone wants to hear Manic Sound Panic hit me up and I’ll send you a link. Again, they were way, way ahead of their time. They were hand-picked to support Living Colour by Vernon Reid, and I don’t think anybody else they toured with really got them, but they supported a lot of thrash bands and they were always welcome in the thrash community.

**7. ONSLAUGHT / 6. XENTRIX / 5. SABBAT **These are three other members of the UK Thrash Big Four, which, if you’re reading this article and you don’t know who any of these three are, why are you reading this article? It makes no sense! Sabbat were like a UK Kreator, Xentrix were probably the UK Testament and Onslaught were the UK Metallica. We played with all three bands, got on with all three bands, liked all three bands. I wouldn’t say we were all mates. We were very close with Sabbat, which always surprises people, because we had this image of not giving a shit and I think we were incorrectly labelled as a joke band – we had a laugh, but we were never a joke band – but Sabbat and us probably represented the opposite ends of the scale, because Sabbat were overt with their costumes and stage props and we were the exact opposite. But then between the two of us were Onslaught and Xentrix. But all of them were just really tight, good quality thrash. They’re three very cool bands and if you haven’t already checked them out, you need to go and check them out and they’ll sort your life out very quickly after that.

4. GAMA BOMB They’re a band with a sense of humour. I remember speaking to Philly [Byrne, vocals] and he said, ‘We’ve written a song called Shitting Yourself To Live’. That’s a fucking brilliant song title and it aptly describes being in a thrash band in the current climate. I like Gama Bomb. There’s something about them that’s just uniquely thrash. There’s a number of new school thrash bands that are not on my list and that’s because, for me, they sound too derivative. Maybe I should take it as a compliment that they sound that derivative, but for me they’re just not bringing anything to the table and they are literally glorified tribute bands. I’m all for bands who are genuine and which rings true, but not for people who sound like they’re just copying their five favourite bands. It just seems disingenuous.

3. VISCERAL ATTACK I absolutely love Visceral Attack. They had me perform onstage with them for a laugh and do a Nuclear Assault cover with them, and they’re the quintessential UK thrash band. They’re around now and you can check them out and they’re awesome. The thing they have for me is just a real integrity to their sound. It’s just so genuine. You hear it and you think, ‘Boy, these guys don’t take one backwards step.’ I can’t even remember how I discovered them now, but my favourite album is Quick And Severe. It’s the perfect title, because that’s exactly what it is. It is quick and it is severe. It’s brilliant and it’s chaotic and it sounds like it could just go wrong at any minute and it doesn’t, and I love that. That’s what we’ve lost over the years with – and I don’t want to sound like I’m 80 – but that’s what we’ve lost with ProTools. Don’t get me wrong – I accept it and that’s where we are now and I don’t have a problem with that – but at times on this album you just think ‘Fucking hell – really?!’ it sounds like the drummer’s going to fall off his stool at any minute and it’s all going to go crashingly wrong, and I love that.

2. DESOLATOR They’re a band based in Southampton who gig as much as possible. Desolator is the perfect name, because to me it sounds like a German thrash band, and they have got a bit of a German feel to them. But again, they’ve got a really, really cool old school sound but they’re a new school band and again, it comes back to that integrity. It sounds like a bunch of guys who absolutely love thrash but want to do their interpretation of it, and not just repeat what everybody else has done. I met them at that Gama Bomb and Visceral Attack gig, and they were third on. Actually, I’m not sure they were even on the bill. But when I got up and did that Nuclear Assault song with Visceral Attack, these two guys were down the front chanting ‘Acid Reign!’ I looked down and gave them a wave and they came up to me afterwards and told me they played in a thrash band and were big Acid Reign fans. They were asking me all sorts of questions and were very complimentary, so I thought the least I could do was to check their band out. I really liked them. They’re a great UK band and people should check them out.

**1. ACID REIGN **For me, without doubt, head and shoulders, the best UK thrash band, the one sticks in my mind more than anybody else would be Acid Reign! Come on – would this be a missed opportunity or what? There was no way I couldn’t use this opportunity to flog my wares. What makes us the best? Basically, because I was in them! Because we’ve rebooted and we desperately need people to go and make the effort to listen to us. No, truth is, everything’s so subjective. Members of bands will have different favourite albums of theirs that they have done, never mind people who are actually into the music outside of the band. Every band here is on a similar level and I am tongue firmly in cheek saying we’re the best out of that lot, but out of that lot we’re certainly the best I’ve played in! Anybody reading this should definitely check out our old stuff, but more importantly, keep your ear to the ground for some new stuff. Go check out Creative Restraint and Thoughtful Sleep from the (1990) Obnoxious album, from (1989 album) The Fear it would be Humanoia and Blind Aggression, and from (1988 mini-album) Moshkinstein give yourself a treat and listen to Goddess and Motherly Love. And after you listen to those six songs, I’m sure you’ll be absolutely hooked and will actually go away and fucking buy them instead of streaming them like a cheap bastard!

H was talking to Mischa Pearlman. For more information on Acid Reign, visit their Facebook page.