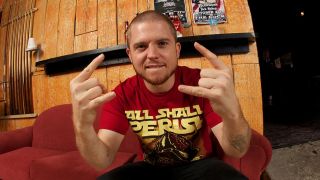 Hatebreed’s frontman has not had an easy life. But despite skipping school in a rough neighbourhood and filing for bankruptcy, he’s spent 20 years building a hardcore empire.

“At first. I was actually the first of my family to go to public school, because my father fell on hard times and sacrifices had to be made. I was cool with school until the fifth grade and then the neighbourhood went downhill, walking to school became dangerous and I’d try to skip school. I had to avoid certain areas because of the possibility of fighting with other kids; we didn’t have enough money for me to take the school bus and you had to walk through the park which was filled with junkies, criminals and other kids cutting school.”

Did being a metalhead make you more of a target?

“Kind of. I had a friend who was black who was into metal and he had it pretty hard because all of the other kids thought it was weird. He got me into Biohazard and Sepultura at a time I was into Metallica and Guns N’ Roses but in sixth and seventh grade, we would trade tapes and look out for each other in and out of school when it came to staying away from violence.”

Did you have a point when you realised hardcore was going to become your life?

“I didn’t get into hardcore until 1989, 1990 when I was 12 or 13. It was hard to sneak out and get to shows but my mother started working at night and I’d go to this club called The Moon in New Haven and I went to every type of show. Ska, punk, metal, hardcore… I loved it all. The hardcore community was the most welcoming and there was a danger element and that was part of the fun!”

Did you want to get more involved in the local scene?

“Yeah, I started putting my own bands together and putting on shows and becoming known on that scene. It was a weird scene because there was a local band called Blind Justice, where the singer dressed up and wore paint, and we had all kinds of people coming to all the shows and that’s kind of where I had the idea that it would be great to grab people from every kind of crowd like I think we’ve managed with Hatebreed.”

What was your first band of note?

“My first band were called Dreadnaught and we changed it to Jasta 14 and we got to open for Sick Of It All. We tried to play with ska bands, straight edge bands, all different kinds of bands. I fell out with those guys but was known on the scene and got guys together from the scene and, after my 16th birthday, I borrowed my grandfather’s car and jammed with Hatebreed, who were made up of friends and guys I knew from the scene.”

Did it hit off straight away?

“We really liked Madball and Entombed and Earth Crisis and that’s the direction we took. It was very crazy in the early days. With all the drinking and partying and craziness it’s a blur, but the parts that I do remember we worked hard. I worked as a prep cook during the week and we’d practise and do shows from Thursday to Sunday. The demos sold out and seven-inches sold out so we’d go and tour in different territories where we could with Sheer Terror and in ’97 we released our first album and that’s when it really took off. We came from nothing. People really know that we had no money to print t-shirts, we recorded Under The Knife [EP, 1996] for $150 of our own money and people respect us for being the working man’s band.”

Was it a Get In The Van style run of discomfort in those days?

“We did our stint of being freezing in the van and having to sleep on top of the gearstick and there was a lot of crazy stuff. A lot of craziness. Back then, we were so young, we just didn’t think it was that big of a deal to get fucked up and we had a riot at Tuxedo Junction in Connecticut, everyone was drunk and fighting the bouncers. There were hotel rooms that got wrecked, a bus window that got smashed and a bus driver who got hit and stuff that hurt our reputation, but we’ve outlived that and become easier to deal with over the years! In 1998, we got thrown off of Warped Tour; we’ve never been allowed back.”

What did you do to get banned from Warped for 12 years?!

Did you suffer the ‘sell-out’ bullshit from the hardcore circles when you started appearing on Ozzfest and signed to Universal?

“Yeah, people told me we sold out when we signed to Victory way before that. They said that Victory were the McDonald’s of hardcore! I was heartbroken but we loved Strife and Integrity [also signed to Victory] so we thought it was a good fit for us. We got the same when we signed to Universal but we had thick skin by then and it came to a point where we said, ‘Fuck everybody, I’m going to do what’s right for myself!’ We put out the hardest record we could and we called it Perseverance because if people didn’t respect how hard we’d worked to get to that point, they weren’t ever a fan for the right reasons anyway. When that record exploded, it was vindication. It’s not the logo on the back of the CD that matters, it’s the one on the front of it.”

What are the biggest struggles you’ve faced over the years?

“Becoming a father at 19 or 20 and not having a ton of support, overcoming a lot of deaths and suicides around me, I’ve had to file for bankruptcy as money was so bad to the point where I couldn’t even put gas in my car! There were a lot of hard times but I always try to have a positive outlook. I write a lot of positive lyrics because, no matter how hard things get, I want to be able to sing songs for the next 10 years that will always remind me that life’s worth living and there’s always hope, no matter what you’re going through.”

How significant was it when you curbed your drinking in 2008?

“It definitely helped me get my life back together. We did a UK tour in ’05 that was Hatebreed and Crowbar and I ended up being wasted for that whole tour with Kirk [Windstein, Crowbar frontman and Kingdom Of Sorrow bandmate], we recorded the KOS record wasted in ’05 and we partied all the way through that. KOS and Icepick [Jamey’s hardcore/hip-hop collaborations project] were all about partying when they started but, ultimately, there were too many forgotten nights, bad decisions and complete debauchery. It got to a point where I had so many opportunities in life, I didn’t want to disrespect them by boozing them away. I was a happy drunk, though… I was happy until I was hungover the next morning!”

How did presenting Headbanger’s Ball in the US come about?

“They looked at a bunch of people to host – Howard [Jones] from Killswitch [Engage, vocalist] was one – but we were one of the biggest-selling heavy bands at the time and I focused a lot of energy on getting that gig. It was awesome that the ’Ball could open the door for Lamb Of God, Avenged Sevenfold, Atreyu and As I Lay Dying and that whole movement but we could still play Terror, Napalm Death, Madball and Decapitated for nine weeks in a row! To be part of Headbanger’s Ball’s history and to be able to do it while remaining true is one of the best things I did in my life.”

It’s little known that you’ve been in movies…

“I just felt like I was promoting other people’s clothing that didn’t have any love for metal or hardcore and I felt like I could do it better, being die hard into it myself. We had Hatewear in 600 stores across the US and the partying took precedence and made me slip on that but it’s all back now. We’re going to relaunch everything in 2011 and I’m working with new people and manufacturers and spending more time on that.”

Does your life ever feel a bit P. Diddy? A series of successful bands, movies, TV career, clothing…

“I’m still on a small level. Besides Hatebreed, everything else is small. I love doing everything but I’ve spent this year reconnecting with my home life. I’ve been able to get into my sister’s kids’ lives, my grandparents are over 90 and I had Thanksgiving at home this year. It’s become more important to me to prioritise my family over the business, instead of being the other way around like it has been for the past 10 years.”

At this juncture of your life, what’s your biggest achievement?

“My daughter. It’s rewarding to see her and my sister’s kids playing and enjoying the life we never had… the most rewarding thing ever. Seeing my daughter think I’m the world and having the most diehard fans on the planet with Hatebreed are the greatest things to happen to me.”