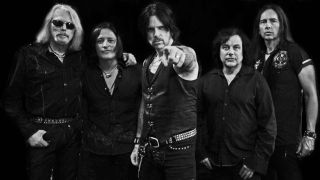 Black Stars Riders have released a lyric video for Soldierstown. Taken from their album The Killer Instinct, it’s timed to coincide with the band’s UK and Ireland tour with Whitesnake and Def Leppard, which kicks off in Dublin on December 6.

“Soldierstown is a song with a dark and poignant lyric tempered with a huge Celtic guitar riff,” says singer Ricky Warwick. “Sometimes pulling the covers over your head is not enough!”

“To say we are excited by being part of the Whitesnake and Def Leppard bill is an understatement,” he continues. “It’s always great to go on tour with your friends, and Black Star Riders will have been on tour in Europe four weeks prior to this… so we’ll be well-oiled and fired up for it!”

(All dates are supporting Def Leppard and Whitesnake, except December 11 & 17).