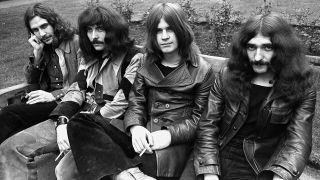 Black Sabbath will be honoured in their home town of Birmingham next month, when a steel bench is unveiled in the city.

News of the project first came to light last year, and it’s now been confirmed that it’ll be revealed to the public at a ceremony on February 9.

The bench will feature images of Ozzy Osbourne, Tony Iommi, Geezer Butler and Bill Ward and will be placed on the renamed Black Sabbath Bridge on Broad Street.

Manager of Westside Business Improvement District, Mike Olley, tells the West Side website: “We’re so excited to be arranging this spectacular event when we expect Tony Iommi, Geezer Butler and Bill Ward to accept the bench, honouring what’s arguably Birmingham’s most famous band.”

The initiative was spearheaded by Sabbath fan Mohammed Osama, who adds: “I’m thrilled that my plan to pay tribute to Black Sabbath in their home town has finally reached this presentation stage.”

The bench was created by Egyptian artist Tarek Abdelkawi in conjunction with Etch Components and Gateway Steel Fabricators.

In addition, it’s been confirmed that Ward will also be awarded his own star on the city’s Walk Of Stars on the day.

The ceremony will take place at St Luke’s Gas Street Church at 41 Gas Street at 11am, with tickets now available.

Proceeds will be donated to the Westside Charitable Endeavour.