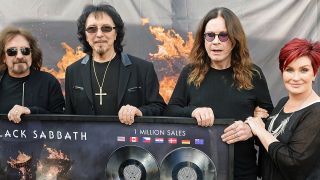 Ozzy Osbourne says Bill Ward’s potential return to Black Sabbath will be down to his wife Sharon.

in September the singer revealed plans for the band’s final album and tour, expected next year – and added that he hoped original sticksman Ward would take part in the project.

He bowed out of the 2012 reunion that led to last year’s album 13, saying he hadn’t been offered a contract he regarded as “signable.”

Now Ozzy tells Billboard: “I would absolutely love that; we all would. We were all sad he didn’t come the last time.

“But I don’t deal with the dough and the business side. That’s my wife’s job. The thing is, when you’ve got four guys with four different agendas and managers, it gets pretty crazy. I just go, ‘You do what you’ve got to do, Sharon. I’ll do what I’ve got to do.’”

He’s already announced plans to return to his solo career after Sabbath end theirs. “We’re disbanding the name and everything,” he says. “They don’t want to tour any more – I get it. But I love it.”

And although his next Ozzy album is still two or three years away, he has an idea of how it will sound. “Black Sabbath is slow and demonic –Tony Iommi is untouchable for that kind of stuff. My stuff is more melodic, more structured of a song. It’s more kind of rock than doomy music.”