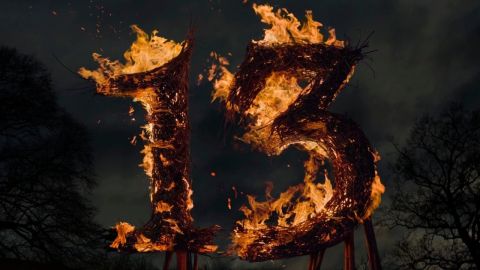 And so we’ve come full circle. Dear Father, the steel-plated track that closes Black Sabbath’s first album with Ozzy Osbourne in 35 years, ends with a peal of thunder and an incoming storm – the same ominous sounds that ushered in their debut all those years ago. After all the success, bust-ups, recriminations, reunions, drug madness, bitter lawsuits, reality show meltdowns, serious health problems, repeated rehab stints and general batshit crazy behaviour, we’ve ended up right back where we started.

It’s no coincidence, of course. 13 is the biggest comeback of the year, give or take a David Bowie album, and as such it’s been engineered with the sort of scientific precision that would do the eggheads in charge of the Large Hadron Collider proud. There’s too much riding on it to allow room for confusion, misdirection or anything that might scare the horses. That the result is unmistakably an album that sounds like vintage Black Sabbath right down to inclement weather conditions will come as no surprise to anyone. But the fact that it’s such a good one just might.

It starts, as it should, with an almighty riff. End Of The Beginning is Black Sabbath (the song) redux: an eight-minute wallop to the gut that ladles foreboding atmospherics onto tectonic grind, before stepping up its pace around a third of the way through. ‘Reanimation of the sequence rewinds the future to the past,’ howls Ozzy, and while the sentiment may be pure Doctor Who-circa-1976 hokum, the delivery is gloriously clear-headed: the dead-eyed zombie who multi-tracked his way through his last few solo albums is nowhere to be heard.

They’ve played it cunningly. Amid all the blind idolatry that has grown around the band, it’s easy to forget that every album recorded by the original quartet had its own personality: Black Sabbath was wide-eyed and bluesy; Paranoid swung from pole to emotional pole; Master Of Reality was a rush of blood to the head and Vol. 4 was the dense, druggy comedown; Sabbath Bloody Sabbath was wired and experimental; Sabotage was just mental. Even Technical Ecstasy and Never Say Die were different. Not good. Just different.

Here’s the thing: 13 doesn’t sound like any one of those albums. It sounds, at various points during its 70-minute length, like all of them: a riff here, a melody line there, the odd ‘Alright now!’ thrown in for good measure. With its unlikely guitar/ tambourine combo and bank of keyboards, the otherwise monolithic Age Of Reason wouldn’t be out of place towards the end of Sabotage; the punching, jabbing riff and fast-footed percussive tattoo of Live Forever can trace its lineage directly back to Children Of The Grave; the hazy, dislocated Zeitgeist effectively is Planet Caravan Pt II, with a Django Reinhardt-inspired guitar solo and an astronaut-drifting-in-space narrative nicked from Bowie’s Space Oddity; Damaged Soul is most startling of all, a heavy blues jam replete with wandering harmonica that rewinds all the way back to their debut. In another band’s hands, all this might sound crass and lazy. Here, it’s both hearteningly familiar and mightily impressive.

Lyrically, too, this is pure 1972. The over-riding preoccupations remain the triple-headed terrors of science, religion and death. The imagery is stark and often hopeless: ‘Rivers of evil run through dying lands’ in God Is Dead?, while Dear Father takes aim at the Catholic Church (‘In silence, your violence has left my life in ruins’). If Damaged Soul is to be believed, then Ozzy was ‘born in a graveyard, adopted by sin’. The Aston Tourist Board will thank him for that one.

Of course, this isn’t wholly Black Sabbath, as Ozzy himself has admitted. Bill Ward is the Banquo at this feast, a shadowy spectre lurking in the background as a partial reminder of the business concerns that are inextricably tied up with Sabbath these days. Does the album miss him? Definitely. It’s lacking the wild edge he brought to matters, the sense that it could all fly off the rails at any point. You can, if you’re minded, extend that Rick Rubin’s production – it’s clipped but maybe too clipped, polished but perhaps too polished. A bit of fluff on the needle wouldn’t have gone amiss.

But what’s done is done. No, 13 isn’t as good as their first six albums – what is? – but it’s a million times better than most of what followed, and way more than you could ever expect from a three men of pensionable age who proved all they had to prove 40 years ago. If it does turn out to be their last album – and time, age, health and a few sizable hints in the press and on the record suggest that’s not impossible – then this is the perfect way to close the circle.