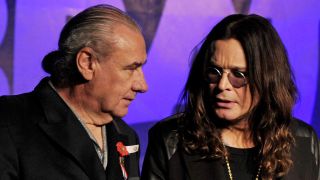 Former Black Sabbath drummer Bill Ward has described how he went through a period of grief over the end of his friendship with singer Ozzy Osbourne.

The pair were involved in a public war of words last week after Ward said he couldn’t consider a return to the metal icons for their farewell tour unless Ozzy performed a “righting of wrongs” over allegations he’d made about the drummer’s abilities.

The vocalist refused to entertain the suggestion and told the sticksman: “Stop playing the victim,” leading to an apparent closure of the door on a reunion.

Now Ward has discussed a period in May last year, after he’d undergone shoulder surgery, when he made a public appearance in the US to launch his artwork series.

He tells Joel Gausten: “I was still in a lot of grief. I was grieving the loss of one of my best friends – Ozzy Osbourne.

“I missed him so much it was devastating to me. When I did the presentation of the paintings, there were some things I was describing and I know I was crying.”

He continues: “There was my loyalty and love for the band. I was in the grief of recognising that I was no longer part of that.”

But he adds: “I’m not saying that I’ve been a victim, as I’ve been told just recently. I wasn’t in any self-pity either.”

He’s gearing up to release Accountable Beasts, his Bill Ward Band album, and solo title Beyond Aston. But in the year Sabbath’s self-titled debut album reaches its 45th anniversary, he believes the 1970 release has a lot of validity today.

“Things were really bad when we did that; the world was fucking on fire. And it’s on fire now. Put the TV on today – the fucking world’s on fire.”

Sabbath are expected to release their final album and embark on their final tour this year.