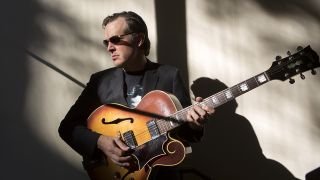 A few years ago, the formerly “fat, long-haired” guitar prodigy from New York looked set to become the next Eric Clapton.

Since joining forces with producer Kevin Shirley he has performed with Clapton and earned enough to fund a 242-strong guitar collection. But as he hits his twelfth solo album, Joe Bonamassa seems to have sidelined mainstream superstardom in favour of a comfortable, bluesy plateau. After years of largely covers-heavy records, that latest album, Blues Of Desperation, is a looser, rockier collection of original songs. It follows his split from pop-turned-rock singer Sandi Thom but, he tells us, it’s no heartbreak record.

Did your split with Sandi Thom feed into the new songs?

No, no. It had run its course, it was four and a half years. It probably went on a year and a half too long, and I think we’ve both accepted that. There’s no hard feelings either way. [Laughs nervously] I mean, at least not on my side.

This is your second album of original material in a row, after 2014’s Different Shades Of Blue. What changed?

You just go through phases in your life. I felt the need to be creative again. Not that I wasn’t creative before, but I wanted to build a house from the basement to the roof. That’s the headspace I’ve been in for the last couple of albums. And it’s very liberating. And meeting songwriters like James House and Jeffrey Steele really opened up that world.

Creatively, were you guilty of settling into a comfort zone by doing so many covers?

I don’t think so, because sometimes when you take a song by someone else and remake it, it takes more work. We’ve done some wacky covers, and it’s taken more work to get those up and running than to write something myself. The thing I have been guilty of is not having confidence as a writer, and not realising that the best songs I’ve done in the past have been my own. Hiding behind something that’s already been done gives you confidence.

Where do you see yourself in the blues pantheon – one of the modern greats, or standing on the shoulders of giants?

We all stand on the shoulders of giants, even the bona fide legends. And the giants never realised they were giants until they were dead and gone. BB King was one. But if you asked him, he’d be like: “No, I wanna be T-Bone Walker.” And if you asked T-Bone Walker, he’d be like: “No, I wanna be like Lead Belly.” The ones that clamour to have their names chiselled on the classic rock Mount Rushmore have a slightly deluded sense of their own influence.

So what are you bringing to the table?

I’ve proved that a guy with a wacky last name, an exaggerated jawline and not a great singing voice can play arenas. None of this stuff that anybody’s doing right now, musically, is rewriting the playbook. It’s a delineation of something that has come before, and I’m comfortable with that.

What is it that keeps you making music, then, if you’re not a ‘great’ or rewriting the playbook?

I love it. I’m not a huge fan of the studio. I like to play in the studio, I like the musicians I play with and I love working with Kevin Shirley. But live is my comfort zone. You make the records so you can play gigs.

Speaking of gigs, why don’t you talk more to your audiences?

I don’t think people pay to hear me speak. It’s just the type of gig I prefer. If I go to a Tom Waits concert and he wants to tell how he wrote a song, I’m all ears. You go to a Joe B gig, you wanna hear how Dust Bowl was written? I don’t see the entertainment.

I don’t think so. As soon as the sunglasses come on, it’s interesting to watch how people respond. Some people go: “Look at him up there in his Hugo Boss suit and those damn sunglasses. What an arrogant prick.” To actually meet me is to meet a different person. I’m a guitar nerd. The suit and sunglasses create a completely different persona. I watched gigs by Eric Clapton as a kid and he said almost nothing. It’s just the school that I learned from.

Would you be where you are without Kevin Shirley?

No. My father put a guitar in my hands, but Kevin was the paradigm shift in the music. His production and his vision of the records… we immediately became a different genre, not just the blues-rock badge. It changed my trajectory from a guy who plays twenty-minute guitar solos to a guy who sings songs.

You’ve hit a comfortable plateau. Is this as big as you’ll get?

I never thought we’d get here, to begin with. I don’t want to be a rock star. My intent was to play guitar and make music for a living, and do it on my own terms. And I think I’ve achieved that. I don’t have the gene for world domination. In fact, I have the gene to run away from that. It’s the reason why every six months I get together with the guys from Rock Candy Funk Party and we play the Baked Potato in Studio City for eighty people per show. It’s loose and it’s joyous.

Is there a part of you that would like to hide from the world, emerging only to play those small shows?

No, because I love both. I like the challenge of the big shows.

You’ve said you don’t think you’ll still be doing this at sixty-two. What will you do instead?

Something completely different. At sixty-two you can go out and start something new. I’ll have said everything I need to say musically.

Are you happy right now?

Yeah. I’m a very happy guy. Ten years ago I was very competitive. I had that chip on my shoulder, which made me kind of a grumpy asshole. Now I’ve jettisoned that chip, I let things go and I’m a lot happier.