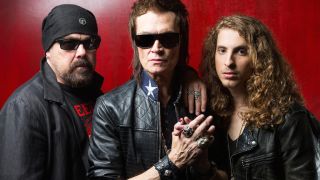 Glenn Hughes guides us through the debut album from power trio California Breed, which is out today.

Glenn Hughes wants to ban the word ‘funk’ from this interview.

California Breed are heavier and more contemporary-sounding than Hughes and Bonham’s classic rock explorations with BCC, though both of their hallmarks are etched into its 12 songs. “What you hear on this album is a very soulful Glenn Hughes,” believes the man concerned. “It’s something that you won’t have heard for a very long time.”

Here’s Hughes-track-by-track breakdown of its contents.

The Way: “Dave Cobb [who has also produced Rival Sons among others] likes to record vocals live which is the complete opposite of what I’m used to. I sang the whole of this record in around two hours and I’m so happy with the way it turned out. The Way is the perfect introduction to what California Breed have to offer. It’s a huge, epic song to break down the doors the way that Black Country [from 2010’s debut from BCC] did. It’s not a rip-off of that song but it’s very 1969. It announces: this is a fucking trio.

Sweet Tea: “After a change of plan, Sweet Tea will now be the first video from the album. It’s the first song that I wrote for this band and it’s got some real swagger. I wrote the melodies and titles for Sweet Tea, Strong and Breathe in two days. We [the band] write separately but finish things off together. I’m very proud of Sweet Tea. It’s very groove orientated and kind of Aerosmith-y. [Starts singing down the phone: ‘Mama’s little sweet tea’]. I’m not a dirty old man but I do like writing adolescent music and I’d like to think we can get a younger fan-base here, without losing our hardcore followers.”

Chemical Rain: “This was the first song that I wrote with Andrew. He played that riff and I went, ‘stop, wait a minute’. I wrote the chorus [which he proceeds to sing], and that’s very Glenn. But the ballsiness and the Sabbath-ness – that’s Andrew. It’s a great combination of our two strengths. That cocksucker’s playing some really dark, heavy shit but it still has a melodic sensibility.”

Midnight Oil: [With no prompting he croons the chorus: ‘Let it burn, let it burn/I’m gonna set it on fire, with the midnight oil’]. “Okay, there’s no getting away from it, that one is funky [laughs] – like Lenny Kravitz all fucked up. I really don’t want to overuse the word ‘funky’ in this article, but Jason and I finally found a guitarist that understands the sparseness that’s so pivotal to our playing. Midnight Oil has real sexual tension, which is way I had a black girl singing with me on it.”

All Fall Down: “Andrew plays a big part in that one. He wrote the music entirely, and I wrote the melody and lyric. It’s a song that deals with… [pauses]… it’s about the dark side when I was not well [in my drug addicted phase]. I was lying on my bed and had all of my friends around me and thought that I had died. That’s what the lyric ‘I should have been gone/But I came back for me’ is about. It’s okay for me to go back and sing about that incident now because it was so long ago. And the song reminds me of Holy Man [from Deep Purple’s Stormbringer album] in a way.”

The Grey: “It’s another song that I wrote completely, though when you see the credits that will be different because every got to put their spin on it. I don’t feel the need to take all of the shares all of the time. Melodically speaking, it’s one of the album’s best songs. It has a great groove. And let’s send out some love to Vance Powell, who mixed it. Vance has worked with Jack White and won a Grammy. He’s a real talented redneck. I cannot believe that here I am working with a bunch of rednecks.”

Days They Come: “At the moment it’s the favourite song of all three of us. [Sings the chorus very loudly]. Vance has used that delay on my voice and it gives a real feel of call and response that Robert Plan used to such effect in the past. Robert doesn’t seem to do it so much anymore, and it works really well here.”

Spit You Out: “Andrew is from New York; he wrote this one on the other side of the country and he sings it on the album alone. If that causes people to raise an eyebrow, well… let’s clear that up. In BCC, Joe [Bonamassa] sang a song or two. Song Of Yesterday was one of our biggest songs but Joe, bless him, didn’t really want to sing in BCC. Spit You Out screams: ‘This is not Glenn Hughes’. I couldn’t have sung it at gunpoint. So we let the kid do it. It’s very Bowie/Lou Reed, almost T Rex, if you will.”

Strong: “It was born during a week’s worth of songwriting, maybe the second track that I came up with for the album. The chorus is very AOR, but it also has some darkness and density. I love it when it breaks down to the bass and you can hear that [pauses to search for words]… almost Jimmy [Page] shit going on.”

Invisible: “It begins with a monstrously heavy riff. Andy wrote the chorus, listen to it and it’s Frusciante [of the Red Hot Chili Peppers]-meets-Andrew. The kid’s only 23 but he’s already on the same playing field as Jason and I. He’s a full partner in this band.”

Scars: “I was out of the country and Andrew and Jason got together and put together the music for that one. They sent it to me and I loved it. The melody and the lyric are mine, and it goes to show what a great team the three of us make.”

Breathe: “I wrote it as you hear it, except for the fact that Dave Cobb said: ‘I want a lead vocal solo’. So let’s have this on record: this is the first time ever in rock music. The part that goes: [launches off into the stratosphere], that’s a vocal solo.

“It also has an appearance from Julian Lennon, who introduced us to Andrew Wyatt. How’s that for symmetry? When he sings Jools sounds like his dad but he doesn’t mean to. He’s a class, class act. When he sang my lyrics and melody for that song he made me weep like a fucking whore.”