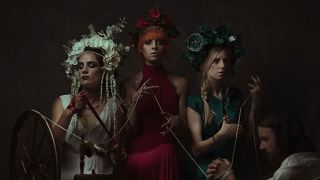 Brighton-based dark proggers Birdeastbaby have released a documentary, How The World Conspires, about the making of their most recent album The World Conspires. Their recently released third album was produced by John Fryer (Cocteau Twins, Depeche Mode) and explores themes of depression, self-harm, alcoholism and bipolar disorder.

"It's us trying to create a musical equivalent of a tragic love-story," says vocalist Mishkin Fitzgerald. "At the time we wrote it we were on a long tour in America and listening to all kinds of things in the tour van, from Opeth to PJ Harvey to Baroness to Gojira. I think the depth and bleakness of those artists was something we wanted to achieve in our own music. We also had more freedom and time to be creative for this album, add the ability to add many more strings/guitars/vocal layers, so the song could build and build to a devastating climax.”

How The World Conspires has been shot and directed by Matthew Small and Gemma Bright-Thomas and can be watched in full below.