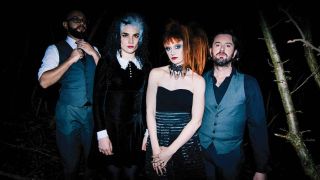 Having walked the high wire between punk and prog for nine years, Birdeatsbaby have foregrounded their progressive leanings while retaining a punk ethos on fourth album Tanta Furia.

“In the beginning it was a punk cabaret kind of thing,” explains singer and pianist Mishkin Fitzgerald. “Quite theatrical and not very heavy, but as the band has progressed it’s got bigger, better, heavier, darker. I now feel we’re close to creating that perfect sound that I’ve been looking for the whole time.

“It’s definitely progressive but it’s also classical, punk rock, goth and I like it that way,” she says, citing Muse and Queen as key influences.

The Brighton four-piece, completed by Hana Maria on violin and vocals, Garry Mitchell on bass and guitar and Forbes Coleman on drums and vocals, also showcase multi-layered string arrangements in their music, adding to their unique sound.

“We’ve got two violins, cello and double bass. I’m a sucker for strings so having Hana, this virtuoso violinist, in the band is incredible.”

A gospel choir (The Dulcet Tones) appear on two tracks on the new album, including the politically charged Mary, which Fitzgerald describes as “basically the ‘Hail Mary’, but with all the words changed”. In the accompanying video she stars as an authoritarian preacher. “It’s about feminism and religion,” she explains. “The Church has abused its power over the years to oppress women so we’re taking the prayer back. I was brought up very much in the Church. I would sing hymns and play organ and piano there so a lot of my early writing influences came from hymns. Then, much to the disappointment of my parents, I went to study music in Brighton but secretly I was just forming a band.”

Third album The Bullet Within was Kickstarter funded in 2013 to the tune of £11,000 by fans (who are affectionately dubbed ‘The Flock’ by the band) who continue to bankroll ventures on a subscription basis. Fitzgerald reveals just what that means to a fledgeling outfit attempting to fly the nest.

“Now we’re using Patreon. We’ve got a really strong group of superfans helping us with our touring and production costs and every expense that comes from being a DIY band. We have all the control, all the freedom. If we want to put out a metal album next time, we can. We’ve recently covered Tool’s Sober, which we’re going to put out – one of my favourite songs of all time. We don’t have to answer to anyone and that’s just beautiful.”

The devotion of The Flock has already paid for European and US tours, as well as a Mishkin Fitzgerald solo show in Mexico City, where the fans were plentiful. “I’ve never seen so many people know about our music,” the singer muses. “It was just weird in a really cool way. We’re going to do another American tour next year and go down to Mexico. It’s why we named our album Tanta Furia as well, a little nod to our Mexican fans.”

Birdeatsbaby are spreading their wings.

Current release: Tanta Furia is out now on Dead Round Eyes Records

Shaman Elephant: It's jazz rock, Jim, but not as we know it

Limelight: Voices From The Fuselage