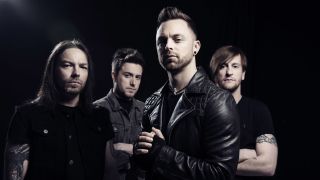 Bullet For My Valentine have streamed their track Army Of Noise.

Frontman Matt Tuck recently said of Venom: “People were wanting a pissed-off band, and it’s hard to write stuff like that when I don’t feel it on a personal level.

“So it was more writing this style of song that I did before the band got signed – making a conscious effort to do something that wasn’t very nice.”

BFMV tour North America with Slipknot and Lamb Of God starting this month. They return to the UK in September.