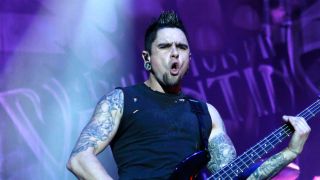 Bullet For My Valentine have split with bass player Jason James.

The band say in a statement that the bassist, known as Jay, has left the group after 12 years – and in the middle of recording sessions for their upcoming fifth album.

No details of his replacement have been revealed, with the band insisting they’ll make an announcement when the time is right.

BFMV say: “It is with regret that Bullet For My Valentine has to announce that Jay James is no longer a member of the band. Jay has been a part of this band for well over 12 years and part of our lives forever, and we’re gonna miss him as much as we know you guys are too.

“We wanna wish him all the best and success with whatever he chooses to do next and will always be grateful for his contribution and sacrifices he made for this band.

“We’ll announce a replacement for Jay when we feel the time is right, but until then we’re gonna be busy and focused recording our next record and making sure it’s the best album we’ve ever made.”

The group said last week they were in the studio with producer Colin Richardson to work on the new record, and there was no hint then that a split with James was looming.

The band are lined up to join Slipknot, Lamb Of God and Motionless In White on a US summer tour, with the follow-up to 2013’s Temper Temper expected later this year.