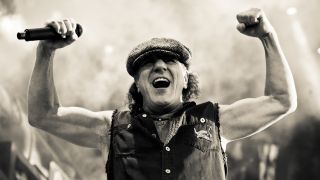 When the story broke, on March 7, that AC/DC frontman Brian Johnson had been ordered to quit touring by doctors or risk permanent hearing loss, fans around the world were stunned, not only by the unexpected news, but by the cold, business-like manner in which the announcement was made. For many longtime fans, that shock turned to anger and disappointment the following week when, during his popular podcast The Metal In Me, US comedian Jim Breuer – a close friend of Johnson – suggested that the singer felt he had been ‘kicked to the curb’ by ‘DC guitarist Angus Young after 36 years fronting the band.

Breuer told listeners that he had visited Johnson at home in Sarasota, Florida on March 11, and found his friend “really depressed”, dismayed and disappointed that the decision to announce his retirement had effectively been made for him. The comedian said “Brian said that he called and let AC/DC and [Angus] Young know, ‘Hey, this is what the doctor said, but let’s try to figure this out. I don’t think it’s as bad as he said it is.’ Literally the next day in the press, it was ‘Brian Johnson, tour cancelled, he’s losing his hearing’.”

As Breuer’s comments were reported worldwide, the comedian attempted to quell the media storm, confessing to being “mortified” for the “invasion of privacy” his words had caused for Brian Johnson, and apologised that he had exaggerated a “very intimate, private conversation” with his friend.

“All Brian said was ‘I feel down & want to finish the job and hope it happens!’” Breuer wrote on his official Facebook page. “The rest was ME GOING OFF…”

With Johnson set to appear on two tracks on ‘Songs From The Garage’, Jim Breuer’s forthcoming debut album with his band The Loud & Rowdy, TeamRock spoke with the comedian to get the inside story on his friendship with the former AC/DC frontman, and his thoughts on how his friend has been treated by the band.

Your vocal impression of Brian Johnson was a huge hit among rock fans: was that what initially brought you to Brian’s attention?
Jim Breuer: “Absolutely. He saw that clip online and he reached out to me to ask if I would do a benefit for a theatre that his wife was working on, and that was how we started hanging out. I never expected to meet such a genuine, humble, hilarious guy… Brian is probably the funniest guy I know. And just the most giving, most generous human being that I’ve ever come across. I don’t think he has any clue of the impact that he’s made on hard rock and on AC/DC fans. I tell him ‘If it wasn’t for you, I would have never discovered Bon Scott, you are what drew me in to AC/DC’. The first time I heard his voice I was like ‘What is that? Who sings like that? I gotta see this guy!’ But he has no clue that he is that person.”

When you hang out, do you talk about music? I don’t imagine Brian sits around home listening to heavy metal…
“No, that’s not his thing, he likes really good ‘50s and ‘60s music. We talk a lot about history actually. I could sit and listen to him talk about English history for hours, he talks about World War II and the years before that and it’s like hanging out with my favourite uncle. My father was a World War II vet, his father was a World War II vet, so we hit that a lot. When we talk music it’s more likely to be about The Beatles, or the beginnings of rock ‘n’ roll, nothing current.”

You were very clearly mortified when your comments about Brian being ‘kicked to the curb’ from AC/DC exploded worldwide…
“I was absolutely mortified. The thing that I’m ashamed of – and I should have known better – is that I had no clue that that was going to happen. And the thing that I resent and was hurt by the most was that Brian was just put on the spot. He woke up, he was going to play golf, and he’s already dealing with the hearing issue and what’s going on with the band, and then he wakes up and this news is everywhere because of me. That phone call from him that day was awful. He called and said ‘Jim, I got a call from England from a friend and he said that Jimmy Breuer said I was fired from AC/DC…that doesn’t sound like something you’d say.’ And I went ‘No! God! No!’ I was talking on my podcast and venting about how I felt, but I didn’t say that you were fired.’ But yeah…that still really bothers me.”

Every rock fan in the world has an opinion on how things have played out between Brian and AC/DC, of course, but obviously you two are friends and no-one likes to think that their friend is talking about them behind their back…
“That’s right. As a fan, and as someone who loves him and respects him almost like a family member, I was hurt and angry for him. I vented that, and I have a right to vent that, but I didn’t have the right to put him in that spot. I’m still angry and bothered by it though. I’m mortified that that’s how he was treated. That statement saying, effectively, ‘Thank you, and good luck in your future endeavours’… What? The man put you on the stratosphere, he’s the one that brought so many more listeners to AC/DC, that brought someone like me to see them year after year in concert, who was the gateway for so many people to discover Bon. It would have been so much more respectful to honour him properly, to say ‘We’re devastated, here’s our boy and we’re going to make sure he goes out in the right way, with a proper salute’, but no. I don’t think Angus realises how brutal it seems to everyone else. If someone worked at Walmart for over 30 years they’d expect a proper send-off. My brother worked for the State of New York for 40 years and right before his pension kicked in they let him go, and I wanted to drive up there to the Governor and smash his teeth down his throat for being so disgusting. And I kinda feel the same way about Brian. How can you do that to anyone who’s put so much of their life into their work? It just blows my mind. So yeah, I’m a little angered by it.”

Would you contemplate going to see AC/DC with Axl Rose, or will your loyalty to Brian rule that out?
“No, I’ll watch it on YouTube maybe, but I have no intention of giving over any more money to AC/DC until I see Brian honoured and put on a pedestal. ‘Yeah, thanks for everything, now we’re going to move on.’ Get out of here. I can’t live with that, I can’t respect that.”

Do you have an opinion on Axl fronting the band? Do you think he’ll carry it off?
“I’m sure he can. I have nothing against Axl, I just don’t want to see him fronting AC/DC. He’ll pull it off, but it’s just weird. I watched the Guns N’ Roses Coachella performance on YouTube, and obviously Angus went up and played with them, and I thought that was weird. He looked out of place, it’s the first time where the school boy outfit looked kinda corny. In AC/DC, I want to see it, but outside AC/DC? I don’t know, it felt funny. The whole thing just feels wrong to me. I love AC/DC, but this isn’t right. Brian deserves better.”

Jim Breuer and The Loud & Rowdy’s album ‘Songs From The Garage’ album is due on May 27, via Metal Blade.

Dear AC/DC: Here’s 20 Ways You Can Rescue This Situation

Why Axl Rose joining AC/DC is the worst idea ever

Why Axl Rose joining AC/DC is a brilliant idea