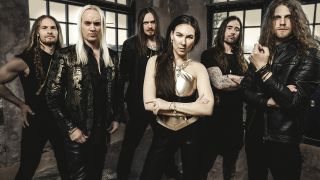 The follow-up to 2018’s Helix is titled Manifest, and it’ll launch on October 2 through Nuclear Blast.

The Swedish outfit say: “Manifest is the latest step in the evolution of Amaranthe, and across the board it is the boldest statement: We are here to stay, we are utterly passionate about what we do and we will take no prisoners in our strive for musical excellence!

“An all-out metal rollercoaster, Manifest does not hold back in any regard – from the first second to the last, it is brimful with some of the heaviest Amaranthe riffs to date, soaring and emotional vocals and unrelenting metallic fury.

“We hope you will enjoy this album as much as we enjoyed making it!”

Amaranthe will premiere Viral – the first single from the new record – later tonight at 7pm BST. Keep this page bookmarked and watch the video right here.

Manifest will be released on various formats, including CD, coloured vinyl and as a media book with four bonus tracks including a cover of Sabaton’s 82nd All The Way.