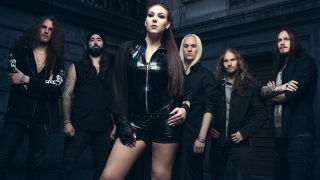 Amaranthe have confirmed they’ve completed work on what will be their sixth studio album.

The Swedish band made it into Denmark to record the album in March, just hours before the country closed its borders due to the pandemic, with Amaranthe reporting at the time: “We were quite literally the only ones making our way into the country, while everyone else was trying to get out!

“As you can no doubt imagine, people think that we are mad.”

But with the lockdown in place and studio time secured, Amaranthe have been hard at work on the follow-up to 2018’s Helix – and they’ve also announced a release date.

Amaranthe say: “Our sixth album is now completely done! On Sunday, a few select members of the press and music industry professionals got the opportunity to hear our new effort, and the response was overwhelming, fanning our flames of excitement even further!

“We can now officially unveil that the album will be out on August 28, and the entire Amaranthe band and team is smouldering with anticipation to unleash this monster upon an unsuspecting world.

“Stay tuned for  the most monumental and accomplished Amaranthe record to date!”

The record was produced by Jacob Hansen and will be released through Nuclear Blast, with further details to follow in due course.