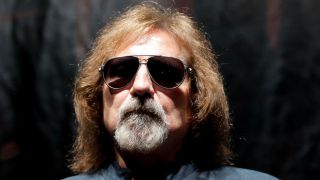 One of the founding members of Black Sabbath, Geezer Butler has been the band’s bassist and chief lyricist for the best part of 50 years, on and off. Born Terence Michael Joseph Butler on July 17, 1949 in Aston, Birmingham, he now lives in Los Angeles with his wife and manager Gloria. Following the release of Sabbath’s comeback album 13, Butler says he would be happy to retire at the end of their world tour, but he’s not ruling out another album in the future. “With Sabbath,” he says, “you never say never…”

We’re still into the same kind of music, whereas Planty’s been doing country and western with Alison Krauss, and stuff with his own band that’s nothing like Zeppelin. He’s strayed so far from Zeppelin, it’s probably harder for him to work with Jimmy Page now.

You all say that you miss Sabbath drummer Bill Ward. But you probably don’t miss the days back in the 60s when you and Bill would share a bed on tour.

Oh God. He was always wafting.

‘Wafting’? Is that Brummie for wanking?

Yeah. You’d go to bed, and the bed would start shaking.

What are the best and worst drugs you’ve ever taken?

They’re all the best when you’re taking them. The worst was when I overdosed on acid. We were doing a gig in a park in Leamington Spa in 1970. And as we were driving into the park, I thought the flowers were trying to get into the car to strangle me. It ended up with me playing on stage thinking I was on a boat and the buildings were waves, and I thought my hand was a big spider running up and down my guitar. Acid was a marvellous drug.

When Sabbath toured in 1977 with AC/DC as the opening act, it was alleged that you pulled a knife on their guitarist Malcolm Young.

No, I didn’t pull a knife. I always had flick-knives when I was growing up, because everybody used to go around stabbing each other in Aston. Flick-knives were banned in England, but when we were playing in Switzerland I bought one. I was just flicking it, when Malcolm Young came up to me and started slagging Sabbath…

So you flicked the knife in his general direction?

No. We were having a drink together and I was just playing about with the knife. I was really excited to get one again. I was having a drink, flicking my knife – like you do – and he came over and said: “You must think you’re big, having a flick-knife.” I said, “What are you talking about?” And that was it. Nobody got hurt.

When Ozzy left in 1979. Bill and me literally cried to each other. Ozzy was a person we’d grown up with. It was something that had to happen, but it was the end of an era.

What has been your biggest waste of money?

There was a Bentley I bought. It looked great and I got it for a really good price. But when I took it for a service it was completely rotted from grille to boot. This was in the seventies. I think it was about twelve grand, and I sold it for scrap.

Not having a lawyer and an accountant when we first started. But nobody did back then. What can you do apart from music? I’m a good vegan cook – through necessity. And I make a good cup of tea.

My kids. One’s a film editor – he’s earning more money than I am – and the other one’s just graduated from Oxford.

You may have spawned a genius. Does that surprise you?

No, because I always thought I was one.

What inspires your lyrics?

The Bible. When I first went to school we read The Iliad and The Odyssey, and I can’t remember anything of what they were about, but The Bible stuck with me.

Death. You go through life and that’s it. But I definitely think everything is fated. Or at least some of it is. My whole life has been either ridiculously coincidental, or it was all meant to happen. I don’t know what it is. It’s weird.

You’re an Aston Villa fan. Do you pray when they’re losing?

Being brought up a Catholic, you’re made not to ever pray for money, just for safety. But without fail, every time I get on a plane I’ll pray. We’ve had no crash landings so far.

No. I’ll have to take a priest with me on the next flight. I can see the headlines: Sabbath come back and now they’re all dead in a plane crash.

This could be your last interview.

I bloody hope it is.