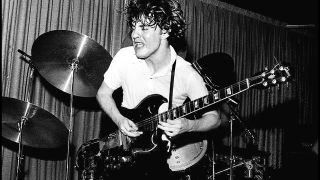 A new documentary exploring AC/DC’s early days in Sydney has been launched online.

The Forgotten Sydney of AC/DC sees them sharing their recollections from the mid-70s, including rehearsals, filming their first video at Cronulla’s The Last Picture Show, and the moment Angus Young first appeared in his famous schoolboy uniform at Victoria Park Pool.

A statement on the film reads: “AC/DC was indisputably born and bred in Sydney but there aren't the statues, plaques and laneways that other cities have to show the origins of one of the biggest rock bands of all time.

“Take a high-voltage trip through Sydney and learn about the forgotten haunts and the story that shaped AC/DC.”

The film also has footage from after Malcolm Young’s funeral in the city, while the guys lament the decline of Sydney’s live music scene.

Watch the film below.

There’s been much speculation about his return to the fold after he was forced to stop touring with AC/DC back in 2016.

He appeared to confirm his return to the band back in January last year after being spotted outside a Vancouver studio with drummer Phil Rudd in August 2018.