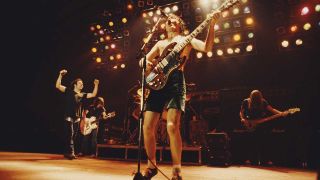 AC/DC have shared some rare documentary footage on their social platforms. The film was originally included on the dual disc version of Back In Black in 2004, and has been uploaded to mark the release's 40th anniversary.

The latest post comes amidst a rare flurry of social activity from the band, who hadn't posted for the best part of a year except to mark the death of Little Richard last month.

Yesterday they shared a picture of a promotional billboard advertising Brian Johnson's North American debut with the band, which took place at the Northlands Coliseum in Edmonton, Canada, on July 13 1980.

Today's clip is the first in a series of videos telling the story of Back In Black, and focuses on the making of the classic You Shook Me All Night Long. In the clip, Angus Young chats about the song's riffs, while Brian Johnson talks about the lyrics.

"I'd written the words and I went in to sing it," he says. "The boys weren't in, and I was singing, 'She was a fast machine, she kept her motor clean, she was the best damn woman that I ever seen.' And Mutt [Lange, producer] said, 'Brian, there's too many words in it.'"

At this point in the clip the late Malcolm Young takes over, demonstrating how the lyrics could have been sung much slower. Not happy with Lange's advice, they decided to record it as Johnson intended, and the rest is history.

AC/DC have also launched a fanwall, and have asked fans to post photos and videos on Instagram using the hashtag #backinblack40. The best contributions will be displayed on the fanwall.

Last moth former drummer Chris Slade said he’s “ready to go” if AC/DC call him about the possibility of any live work.

The Welsh drummer originally joined AC/DC in 1989 but was replaced when Phil Rudd was brought back into the fold in 1994. Slade later took over behind the kit when Rudd was kicked out of the band in 2016 after being found guilty of drugs possession and making death threats.

Although Rudd is rumoured to be back in the AC/DC lineup alongside Brian Johnson, Slade says he’s ready if the band need his services.

He says: “I’m always are ready to go. I love to travel, playing drums, and being on the road as not many people can say that. I hope I will be doing it for many more years.”