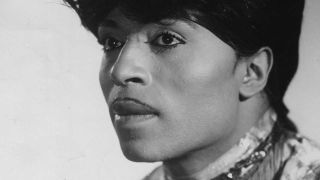 Rock'n'roll pioneer Little Richard has died at the age of 87. The news was confirmed to Rolling Stone by his son, Danny Penniman.

While Elvis will go down in history as the king of rock n’ roll, during his lifetime there was only one serious challenger to his crown. For years, especially during his late 60s/ early 70s comeback, Little Richard deliberately depicted himself as a mad pretender to rock’s throne: extravagant, outlandish, cocky and wild.

Concerts would invariably start with Richard spotlit at the back of the hall, often clad in an ermine robe, quiff pomped to the max and caked in panstick. From there he would wend his way to the stage as a returning hero, through rows of his adoring subjects.

Whatever his regal status, there’s no doubt that he played a major role in shaping our idea of what rock n’ roll is. His breakthrough hit Tutti Frutti and its immortal cry of ‘Awop-Bop-a-Loo-Mop Alop-Bam-Boom’ arguably marks the point when rock makes a formal commitment to violent rearrangement of the senses.

Like many of the original instigators, the man born Richard Penniman in 1932 in Macon, Georgia, was something of a troubled soul. In his case he was caught in a lifelong struggle between on one side rock n’ roll and his unconventional sexuality and on the other his deeply-held religious beliefs.

In 1957, at the peak of his fame, he quit in the middle of an Australian tour and returned home early to the US, claiming he wanted to devote his life to God. Two weeks later the plane that had originally been due to return him to the States was struck by lightning. Richard interpreted this as divine intervention.

He studied to become a minister and even got married, a match that was doomed to failure. The final straw for his wife came when he was arrested in a toilet in Long Beach for lewd conduct. The divorce was uncontested.

In truth by this point Richard had grown bored of the straight life and was eager to get back in the game. His started his comeback in Britain on a 1962 Don Arden-promoted tour with Sam Cooke.

The Beatles were huge fans, tagged along and ended up virtually adopting Richard, taking him on their final jaunt to Hamburg that autumn. He struck up a lifelong friendship with Paul McCartney but was cooler towards his songwriting partner, claiming he disliked Lennon’s habit of farting and fanning the results around their joint dressing room.

John Bonham's drum intro to Led Zeppelin's Rock'n'Roll came from the band messing around with Little Richard's Keep A Knocking, a song also covered live by Mott The Hoople.

Whilst he was hero-worshipped in Europe, in the States he found it more difficult to rebuild his career. He attempted to refresh his music; out went the sax and in came guitars, including a young whizkid named Maurice James. But the virtuoso who would later find fame as Jimi Hendrix didn’t last long in Richard’s orbit - he was sacked for not turning up and general slack behaviour.

Like James Brown, Richard had a reputation for fining musicians for relatively minor misdemeanours. When one hapless guitarist turned up to a show wearing black tennis shoes Richard promptly docked him $50. Yet this hard task master was no puritan. Richard could out-party rockers half his age and by the mid 70s was nursing a $1000 a day cocaine habit as well as dabbling in heroin and PCP.

A succession of tragedies around this time, including the death of his brother from a heart attack made him re-evaluate his life one more. He quit rock n’ roll a second time, renounced his former life and became a travelling bible salesman.

In time he managed to reconcile his great gift for performance with his beliefs and returned once again, guesting during his later years on records by Living Color and Jon Bon Jovi. Unlike many of his contemporaries he was granted a long life and was lucky enough to see his influence unfold over a number of generations. Without Little Richard there’s no doubt rock music would be markedly different; a little more stiff, straight and uptight maybe.

It’s impossible to think that glam rock could have existed without his camp prototype and performers as varied as David Bowie, Alice Cooper, Elton John, Prince, even his old sideman Hendrix, all owe him a deep debt of gratitude. Ultimately his transgressions, his unholy foolery, opened up the space for them and countless others to flourish, to be wild and be free.

A cause of death has not yet been confirmed.