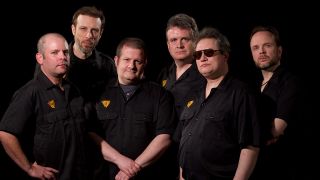 US prog rockers 3RDegree will release a new live DVD in December. Live At ProgStock 2017: The4 Ones & Zeros Show captures the band's performance from the US prog festival. You can watch a trailer for the Blu-ray and DVD below.

The band's ProgStock set was built around two of their most popular albums, 2015's Ones & Zeros: Volume 1 and the follow-up, Ones & Zeros: Volume 0, which although released in 2018, still had material aired at the festival the year before. The band's unique performance on the night was set up as a faux Ted-style talk.

"The band is entering into an indefinite hiatus and it is a great time for looking back," founder, bassist and keyboard player Robert James Pashman tells Prog.

The new Blu-ray can be pre-ordered through the band's website.