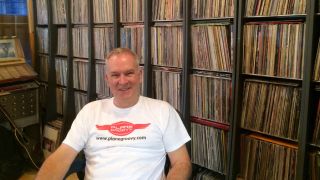 The globe-trotting, the champagne, the women. We might have a romantic view of an airline pilot’s flamboyant existence, but for Plane Groovy label entrepreneur and pilot Chris Topham, pictured above, the reality is bound to a life-long addiction to vinyl shopping.

“I’ve probably got ten thousand albums and six thousand singles at the moment, aside from Plane Groovy stock,” he says, just a day after his latest trip to Delhi. “I try to visit a record shop wherever I go in the world.”

Topham served in the RAF for 20 years until a career change in the 90s when he applied as a pilot with Virgin. His impetus was undisguised. “When I went for my interview, they asked me directly: ‘Why do you want to join Virgin?’ I said: ‘Because of the discount in the Megastore’.”

He was hired regardless and found himself now able to hunt for rare vinyl across the globe – sometimes on a whim. After a tip-off in 2006 he found himself jetting to downtown LA to find some vintage Gentle Giant vinyl. “I hired a car and found the store,” he says. “Staggeringly, they were UK first pressings of the early albums on Vertigo, in immaculate condition and ten dollars each. Sold!”

Topham’s next flight of fancy was over to Hong Kong. “One of my friends, a lawyer in Hong Kong, said: ‘Do you know about Old Paul, up in Sham Shui Po? He sets out his stall in an alleyway between two shops and he’s got loads of quadrophonic recordings.’ I did a trip two weeks later and sure enough there was a load of quad stuff, much of it covered in mildew because of the conditions they were kept in. But among it all were sealed, mint copies of things by Mott The Hoople, Ten Years After and so on, which I snapped up for next to nothing.”

On one trip, Topham had to enlist help. “In Johannesburg I left a dealer’s house with two flightcases of singles, not thinking how much they were gonna weigh. They were about 50lbs each!” he laughs. “Like any passenger I have a cargo limit, so I imposed on my first officers and said ,‘One of you carry this, one of you carry that’. I effectively got an army of mules to help me out.”