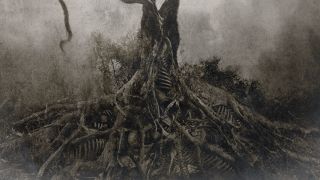 Malcolm Dome uncovers the prog gold from the band’s catalogue for your enjoyment. Happy listening…

IN MIST SHE WAS STANDING

From Orchid. An early example of how the band might have had a solid metal foundation, but within this structure, there’s a restive desire to explore other angles. The aggressively agitating riffs convincingly give way on occasion to a more opaque, quieter mood. You can already feel the way in which Opeth are looking beyond the death metal parameters.

From Morningrise. The longest song Opeth have ever recorded, it starts with a driven riff that morphs into a Celtic-style dual-guitar break before swaying into a tense acoustic fill. An expanded guitar solo then guides the song into a mournfully fragile reflective piece before the track reaches its gloomy denouement. A masterclass of emotional unpredictability.

From My Arms, Your Hearse. While much of this album is very heavy, Credence is superficially mellow. But the somnambulant lap of the music hides a friction that’s all the more predatory because it isn’t released by a sudden burst of manic riffage.

From Still Life. This has an almost languid gait that’s suddenly spiked by a startling guitar crash, which leads to a poised climax, one that fades away into the mist. A rare example of how fading out a song can be effective.

From Blackwater Park. This is another prime example of how Opeth can straddle several styles simultaneously. An opening guitar shard leads into a darkly unsettling passage, with Åkerfeldt’s eerily treated vocals lending a depth to the main body of the song. The rest of the arrangement butts symphonic metal against ethereal melody.

From Blackwater Park. Once again, Opeth shine on a song that comfortably nestles acoustic, folksy thoughts against a more expansive, heavier tapestry of rhythms. What makes it all work is that there’s a progressive pattern running throughout, the band never getting bogged down in metallic clichés.

From Deliverance. Don’t be fooled by the overt, almost doomy heaviness here: Opeth offer a number of supple interjections. These elevate this song well above merely being a cascade of brutality. Even at its most primal, Master’s Apprentices has disturbing erudition beneath its skin.

From Damnation. Opeth might have a light touch here, but their weightiness cannot be ignored. The intertwining of vocals, guitar and keyboards is delicate and the song is enriched by a contemporary, sparse production.

From Damnation. As the title suggests, this is a brooding song. Both lyrically and musically, this is a tale of life ebbing away, but a lightness of touch in the arrangement lifts it beyond the merely morbid. It has a florid sensibility that prevents it from choking on the emotions being reflected.

THE BAYING OF THE HOUNDS

From Ghost Reveries. Don’t be fooled by the growling opening – this is a far-sighted track that comes into its own as the caustic beginning gives way to increasingly complex and layered music. Here, Per Wiberg’s keyboard passages are crucial, helping build towards a dramatic climax.

From Ghost Reveries. It starts with an angular rhythm that connects to a rather pompous glide before the song really takes flight. It mixes quietly stated passages with more aggressive blazing. But just when you feel it’s run out of ideas, there’s a turn into a more psychedelic motif, and then the main theme roars back impressively. Beautifully observed.

From Ghost Reveries. The stark lyrical fatalism is presented in a resigned, slow-paced vocal manner, while the music provides a busy counterpoint. The influences here come from metal, folk and jazz, but all are aligned to magnify the spiritual confusion of the protagonist. A balance of imbalance.

From Ghost Reveries. There’s a strongly tribal feel to some of the rhythms here, and you can also appreciate the impact working with Steven Wilson had on the way Opeth construct a song like this. Multifaceted, all the various parts seamlessly coalesce to leave an overall sense of a musical rite of passage. Even the growling vocals are more theatrical than menacing.

From Watershed. The style is a little more raw, even though the overall sound is sumptuous. It’s a short song that still packs in a lot of daubs and ideas. Åkerfeldt and Nathalie Lorichs’ vocal lines mesh neatly with the acoustic guitars flavouring the mix. It’s a poised, almost understated, yet highly effective juxtaposition.

THE LINES IN MY HAND

From Heritage. When you listen to this, it seems like a very straightforward rock performance. But every time you revisit it, something else sticks in the mind – proof that Opeth can pack a variety of ideas into a short composition, without making it sound cluttered.

From Heritage. Another example of the way in which the band were developing. There isn’t a hint of metal here, with the pulsing riff occasionally giving way to a more elliptic presence, swirling around a pumping keyboard action and with some deft vocals from Åkerfeldt. This leads into a quieter mood that plays out the track.

From Pale Communion. This is very much a track full of Eastern promise, and this styling provides a blanket for some clever musical ideas. Not the least of these is the way it all gently subsides at the end with a plaintive vocal set against a repetitive keyboard refrain.

MOON ABOVE, SUN BELOW

From Pale Communion. A full-blown symphony in 10 minutes. Like the immortal epics of bygone generations, this works because the musicality is filled with passion and a willing tendency to let the rhythms naturally go where they may. It makes for a lot of peaks and troughs that hold the attention throughout.

From Pale Communion. This is how to keep everything very simple yet also expressive, and by doing so to accentuate the dark spirit of the song. Joakim Svalberg shines on keyboards, with Åkerfeldt’s vocals coming across with a confident air of authority. It’s distinctively instinctive.