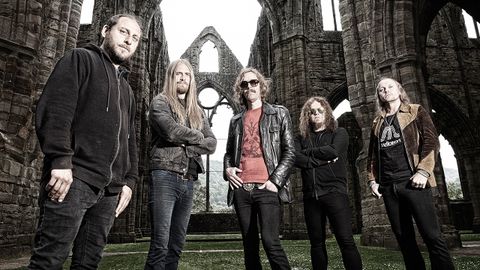 The mild furore that erupted when Opeth began to shrug off the metal trimmings that had been such an integral part of their sound must surely have died down by now, but part of the magic that this band have wielded for so long hinges on their ability to keep surprising even their most open-minded fans. With that in mind, perhaps the biggest shock about Sorceress is how often it sounds like the work of a heavy metal band, albeit one that cares not one tiny toss about keeping Slayer fans happy.

This is still a progressive rock record in most respects, of course. Mikael Åkerfeldt’s gift for welding exquisite melodies to complex, challenging arrangements is again much in evidence, but this is by far Opeth’s heaviest record since Watershed, and it’s a gentle change of tack that reaps huge dividends.

After an elegant, elegiac intro, the title track explodes with a burst of skittering jazz fusion that turns out to be a momentary trick: the huge, chugging riff that swiftly follows is as aggressive as anything Opeth have recorded, and while the song delivers plenty of further twists, it’s the return of those metallic undercurrents that startle.

The album’s final song, Era, is an even more blatant salute to the old school: it’s fast, furious, gloriously catchy and sounds like a 70s analogue reimagining of Europe, or maybe even Dokken. It still sounds like Opeth, too, which speaks volumes about how strong this band’s collective personality has become.

A song as beautifully understated as Will O The Wisp, with its unashamed nods to Jethro Tull and its sauntering, folksy gait, is hardly shocking after the growl-ditching evolutionary steps of recent albums Heritage and Pale Communion, but Opeth have seldom sounded so focused or so utterly relaxed. Fans of the band’s more peculiar urges will be entranced by the psychedelic undulations of The Seventh Sojourn or the unexpected outbreak of woozy blues midway through the simply stunning Strange Brew. Meanwhile, those hoping for more reassuring gestures will adore the rumbling dexterity of The Wilde Flowers, the stately surge of Chrysalis and the heartbreaking fragility of the acoustic Sorceress 2.

As always, this is an album to immerse yourself in. Its multiple layers and surfeit of wild ideas may take time to reveal themselves, but as diehard Opeth fans have long known, this is a band that stands in opposition to shallow thrills and short attention spans. Sorceress is another masterpiece and they make it look easy.

Opeth's Martin Mendez says Sorceress was 'most fun' to record

A Beginner's Guide To Opeth