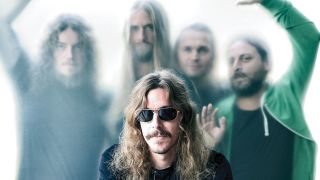 Looking back over Opeth’s 25 year career with 25 facts.

1 The band were formed in 1990 by vocalist David Isberg. He brought in 16-year-old bassist Mikael Åkerfeldt, but didn’t tell the rest of the band about his recruitment, so they all quit. That left Isberg and Åkerfeldt, who switched to guitar, the challenge of revamping Opeth’s line-up.

2 By the time the band signed their first recording deal with Candlelight in 1994, they’d been through a lot of line-up changes, with Åkerfeldt taking over on vocals when Isberg quit in 1991, as well as playing guitar alongside Peter Lindgren. The band’s sound was also developing away from the straight death metal beginnings.

3 Opeth recorded their debut album, Orchid, with producer Dan Swanö in April 1994. However, it wasn’t actually released until May 1995 due to the label’s distribution difficulties. However, Orchid proved how far the band were moving away from their death metal foundation as it incorporated acoustic guitar, piano and clean vocals.

4 In October 1995, the band played in the UK for the first time. After a warm‑up show in High Wycombe on the 30th, they then appeared at the Astoria in London on Halloween, supporting Impaled Nazarene. And on November 5, they headlined a show at The Borderline in London.

5 Second album Morningrise was released in 1996. Again produced by Dan Swanö, this clearly represented a move towards a more progressive approach. Black Rose Immortal from the album is the longest song the band have recorded, weighing in at over 20 minutes.

6 In 1997, Opeth signed to Century Media in America, who released their first two albums in the States. They also brought in bassist Martín Méndez and drummer Martin Lopez, although the latter didn’t play on 1998’s My Arms, Your Hearse. With a title inspired by a lyric from the Comus song Drip, Drip, this was the first Opeth concept album (about the travails of a ghost).

7 In 1999, Opeth signed to Peaceville Records, with distribution through Music For Nations. They released Still Life, an anti‑Christian concept album. And two years later, they teamed up with Steven Wilson as producer for Blackwater Park, which is regarded as a landmark in their history. This was also their first album directly released by Music For Nations.

8 In 2001, the band undertook their first American tour, playing for six weeks with Amorphis and Nevermore. They also made their debut headlining tour across Europe, and on August 4 appeared at the Wacken Festival in Germany, playing to 60,000 people.

9 In 2002, Opeth ambitiously recorded two albums simultaneously, again with Wilson producing. Deliverance represented the heavier end of their style, while Damnation showcased their mellower side. In all, they spent just seven weeks in the studio working on both albums – remarkably, the same length of time they’d taken for just Blackwater Park!

10 Deliverance was released in November 2002, with Damnation following in April 2003. The latter gave the band their first US chart slot, reaching No.192. Opeth also received a Swedish Grammy for Damnation, landing the Best Hard Rock Performance award.

11 In September 2003, Opeth played a special show at London’s Shepherd’s Bush Empire. They performed two sets. One featured an acoustic performance of the entire Damnation album, and the other was a heavier one with songs from Deliverance and Blackwater Park. This was released as Opeth’s first DVD in November 2003, titled Lamentations (Live At Shepherd’s Bush Empire 2003).

12 In 2004, Opeth played at the Download Festival. They were on the main stage on June 5, the first day of the festival at Donington. This was the band’s debut performance at a UK outdoor event.

13 In 2005, keyboard player Per Wiberg finally became a full-time member of the band. He had been part of Opeth’s touring line-up since 2003. The same year, Music For Nations shut down and the band signed a new deal with Roadrunner.

14 Ghost Reveries, the band’s 2005 album, gave them a huge commercial breakthrough. It was their first Top 100 album in both the UK and America, reaching No.62 and No.64 in each country respectively. But this was the last album to feature Lopez and Lindgren.

15 In 2006, Lopez quit the band for health reasons. He was replaced by Martin Axenrot. Opeth toured America on the Gigantour festival. They also played at The Roundhouse in London during November 2006. The gig was put out as The Roundhouse Tapes a year later.

16 In 2007, Lindgren left the band after 16 years. Opeth brought in Fredrik Åkesson, who was apparently the only guitarist considered for the task. The new-look band began recording their new album in November of that year, with Åkerfeldt producing.

17 In 2008, new album Watershed was released. This made the Top 40 in both Britain and the US, as it peaked at No.34 in the former and No.23 in the latter’s charts. This was regarded as a major shift towards a more progressive sound, and is the last Opeth album to feature growling vocals.

18 Opeth co-headlined the Defenders Of The Faith UK tour in April 2008, alongside Arch Enemy. They then headed out on the road in America on the Progressive Nation trek, alongside Dream Theater and Between The Buried And Me. They also returned to play at the Wacken Festival.

19 Opeth celebrated their 20th anniversary in 2010, with six special shows dubbed Evolution XX: An Opeth Anthology. They performed the whole of Blackwater Park at the concerts, along with many songs they had never previously played live. The concert at the Royal Albert Hall in April was filmed for a DVD titled In Live Concert At The Royal Albert Hall, released in September that year.

20 In January 2011, the band started work on a new album, with Åkerfeldt again producing, while Steven Wilson was brought in to mix it. However, shortly after the album was finished in April, it was announced that Wiberg had left the band.

21 In September 2011, Opeth released the Heritage album. This broke into the Top 20 in the US, making it to No.19 in the charts, while in the UK it remains their highest charting album after reaching No.22. The subsequent tour introduced fans to the band’s new keyboard player, Joakim Svalberg.

22 In 2014, Opeth released the Pale Communion album. Once again produced by Åkerfeldt, it incorporated string instrumentation as the band continued to expand their sound. It was also Opeth’s most successful album to date, reaching No.14 in the UK and No.19 in America. It was also their first Top Three album in Sweden.

23 On September 3, 2015, Opeth won their first award at the Progressive Music Awards. They picked up the Band Of The Year prize, a sign of how they have become accepted and embraced by the prog community.

24 On September 19, 2015, the band played a special show in Plovdiv, Bulgaria, where they were joined by the 100-piece Plovdiv Philharmonic Orchestra.

25 Opeth are to round off their 25th year by publishing The Book Of Opeth. A lavish celebration of the band’s history, this has rare and unseen photos and illustrations. It will also have a seven-inch record featuring acoustic versions of Atonement and Demon Of The Fall. For more information on the book, see www.opethbook.com.